The apron side of life

What does a simple housewife in North Texas with a teaching certificate (and no job), a puppy (but no kids), and the world at her fingertips (yet so ironically out of reach) find to fill her day?

Ada pup gets at least one walk a day, sometimes more.

The new Bible Study is, believe it or not, study-intensive.

The gym gets an ever-so-often visit.  (Truth: I went today for the first time since September.  Dare me to go again tomorrow)

Sometimes I manage to stay up-to-date with my longest television addiction, The Bachelor (since sophomore year of college, thank ye very much).  Sometimes I don't bother.

But mostly.  I cook.  Or bake.  A lot of times both.  Sometimes I hit the jackpot and make a real winner.  Other times, it's a lot of work with no huge pay-off.  And a few times, I bomb a meal (or treat) completely.

Last week I was browsing recipes in my Whole Foods app (which we have nothing even similar, but a girl can dream) and came across recipe for "Fresh Mozzarella, Italian Sausage and Roast Red Pepper Naan Bread".  Basically, pizza.  But yummier.

I do admit, I made things a lot harder for myself than they needed to be.  And four hours in the kitchen, two fire alarms later and a M.E.S.S. was proof of that.

First:  Roasted Red Peppers.  Now, these suckers you should never make on your own.  You should always, always, always buy them.  I have TWICE made the mistake of roasting my own and not only has it set off the fire alarm both times, the 45 minutes of constantly checking the whole peppers covered in olive oil baking too close to the heat iron on 450 degrees (and getting my eye lashes singed off) was sooooooo not worth the $2 I saved by not buying them from a jar.  And the peeling of the burnt skin?  Messy and aggravating.  So please, next time I utter "roasted red peppers", stage an intervention and force me to jarred pepper section of my grocery store.  Thanks.

I also started making these at like 3pm, so I could leisurely meander from the kitchen and to the tv to watch the HGTV channel.  Wrong.  So starts the timer of how long this meal took.

Next: The Naan bread.  Not to be confused with "Non Bread" Naan is a traditional Indian flatbread that I was to use for the pizza dough part of the pizza.  However, when I told my husband what I was making, he was confused when the final product did, in fact, include bread when I had clearly told him we were having "Naan bread pizza" (which sounds exactly like "Non bread pizza").  Whew.  Either way, this too I made from scratch.  Not because I wanted to, but because the commissary didn't have Naan bread and I was in too much of a time crunch to look elsewhere.  I used this recipe, which I looked up on my phone from the store to make sure I had the ingredients and when I got home pulled up the recipe on the computer.  Except for I must have searched for different words because I was halfway done with measuring out the flour before I realized the recipe I was using on the computer was different than the one I pulled up on my phone.  I did not have all the ingredients it was asking for, so I dumped it out and started again, this time with what I had found on my phone.  (people who try to cook should take a safety/dummy class before starting)  This took a few hours to rise so I was able to deal with the smoking oven from the red peppers during that time. 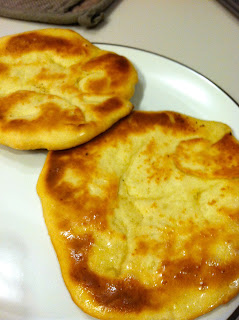 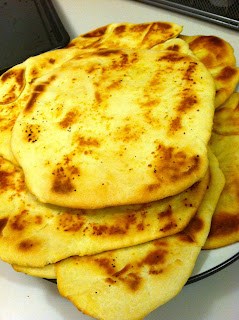 I mean, they turned out great.  Tasty and very Naan-y.  Unfortunately, my darling husband was home long before I rolled these babies out so he sat patiently for this meal.  Strike 3.

Then came the pizza sauce.  Which of course, I made from scratch.  (Will I ever learn?!)  It was quite delicious, though, and wasn't too labor-intensive.

And finally.  After the roasting of the red peppers, the cooking of the Naan, and the simmering of the sauce (and browning of the sausage), we were ready for assembly.

This part of the meal was so simple it was embarrassing.  I knew Tyler was thinking how it could have taken me 3 1/2 hours to make something that took less than 5 minutes to put together.  But oh well. 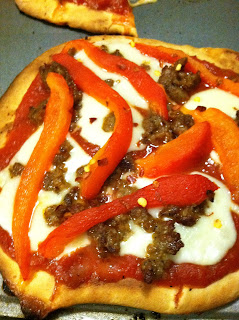 They really were delicious.  The sauce, the bread and even the (gulp) peppers.  But next time I vow to store-buy both the roasted red peppers and the Naan bread.  Whew.

Thanks for stopping by!

Yum! Would you like to come cook for me? I promise to appreciate all of your culinary prowess and dedication!