Korea is teaching me...

My husband left for a few weeks, and someone else stole my heart.

It might have been day two or three, or maybe even the first time I heard them repeat a word in English, muttering as to not disturb anyone, but still wanting to hear themselves say it. Maybe it was when they called me, "Teacher" for the first time, or explained and then apologized why they fell asleep in my class. I'm not sure, but either way, I do believe my heart was stolen politely and quietly by the youth of Korea, and thus, Korea itself.

I've said this before, but it is so hard to explain the gravity of a student on the edge of their seat, waiting for you to say a word they don't know so they can repeat and commit it to memory.

Today I met with a woman I will be tutoring once or twice a week after we are both finished teaching at our respective schools. She is a Korean who teaches Chinese who has a dream of learning English well enough that she is no longer shy or nervous to speak it. She told me she was nervous to talk to me, and I made sure to tell her she was much more adept than she realized, which was no stretch.

I have found it to be true with her, my students, co teachers and the people I have had lunch with on schools days that it is a challenge to talk simply (and slowly...) but also use regular jargon that makes everything seem much more natural than the rules they know so well from studying their books. And this has done wonders for my understanding of just how complex the English language is, something that I have never totally had to understand. For example, when I greet the students when they come in to class, I have to make a conscious effort to not say "hello", followed by "how are you" because they have learned and will repeat until their death to say hello and also immediately "I'm fine thank you, and you?" It is like clockwork. This is a typical conversation at the beginning of class:

Forcing myself to speak as I would normally, in a regular-school setting is something I hope will stick with them in order for them to learn other ways of greeting each other. Of course, every single textbook tells the students to respond how they do, so they will still do well in the grade book.

I didn't realize but the second I stepped foot in that school, I would be regarded as the "expert" of the English language. (if they were to examine my test scores and school records, they'd find how misguided that may be) I am asked daily, sometimes more than once, to check the grammar and usage of a particular sentence or paragraph, especially now that finals are coming up next week. If you know the really weird things about me, you probably know that editing is something that has always gotten me excited. There is no better flattery than someone asking me to edit a paper of theirs. And here I am not only allowed to do that any day of the week, but it is expected of me.

There are other ways Korea has stolen my heart. Seeing it through the eyes of people who have just arrived to the squadron make the country come alive. I took a few people on their first train ride to the shopping mall a few stops away (which is coincidentally just a 10 minute walk from my school) and even though Tyler and I spent his birthday there, and I have been a couple other times, was blown away anew by each of the 10 floors, and the rooftop garden that I had never noticed before. Korea does shopping and entertainment really well, and this building is no exception. 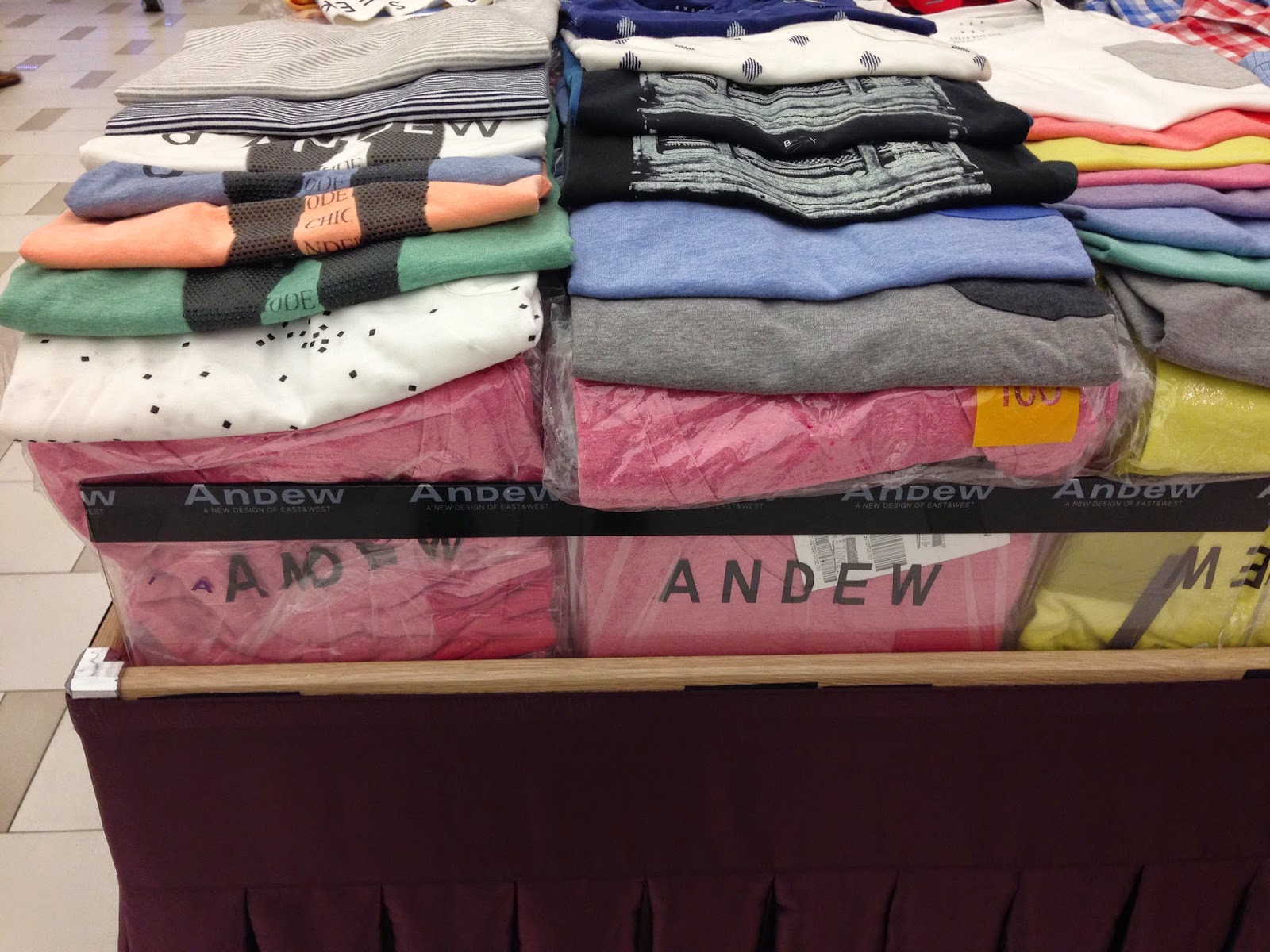 I couldn't help but snap a picture of this clothing rack in the mall/plaza...my brother Andrew will appreciate another great example of the korean/english that is so entertaining. I can't wait for his visit here! 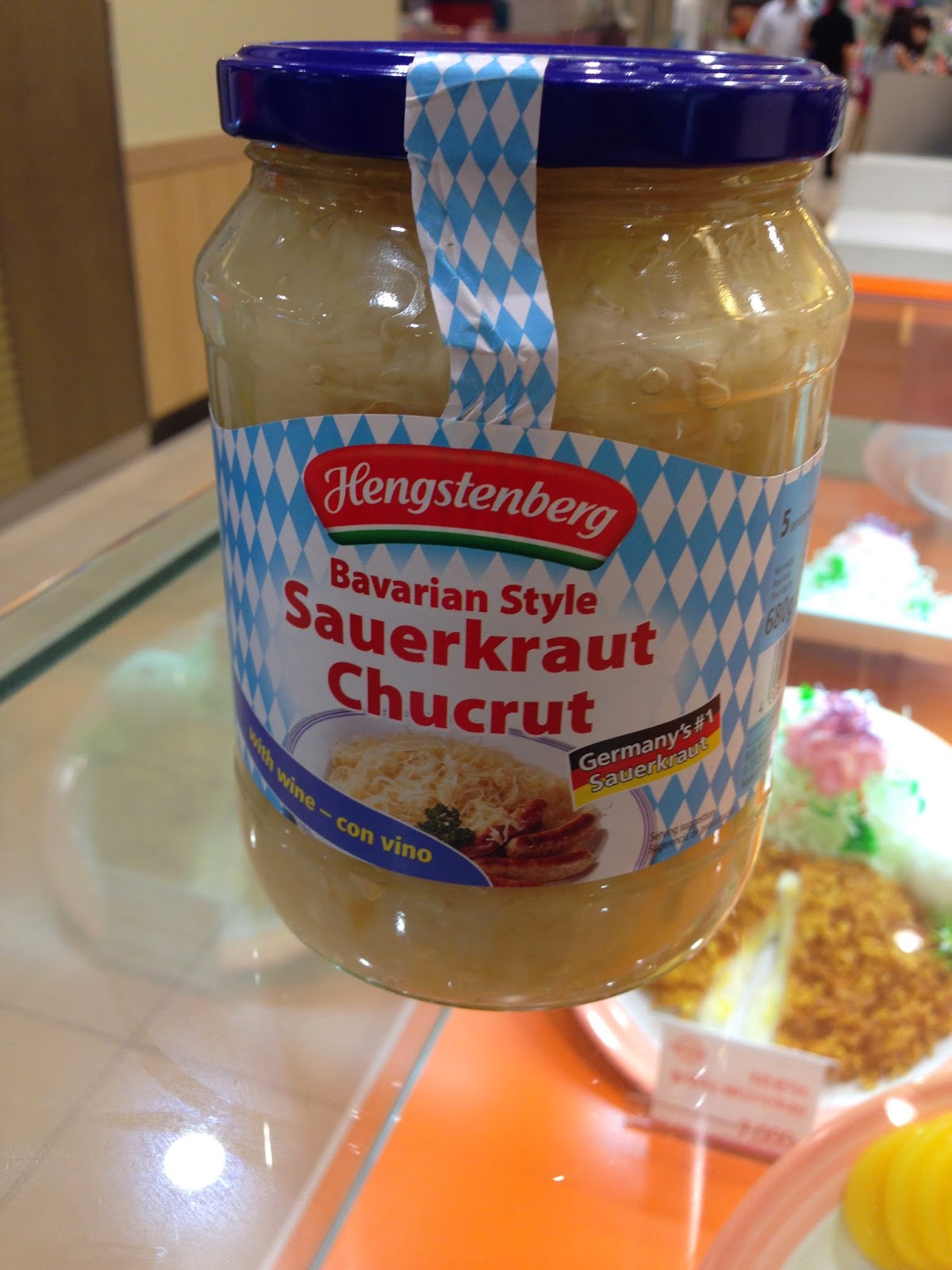 The plaza had a basement half devoted to little "fast food" eateries, but the other half devoted to amazing Korean produce and fish and otherwise impossible to find (outside of our American commissary, of course) imported food, like this awesome sauerkraut. 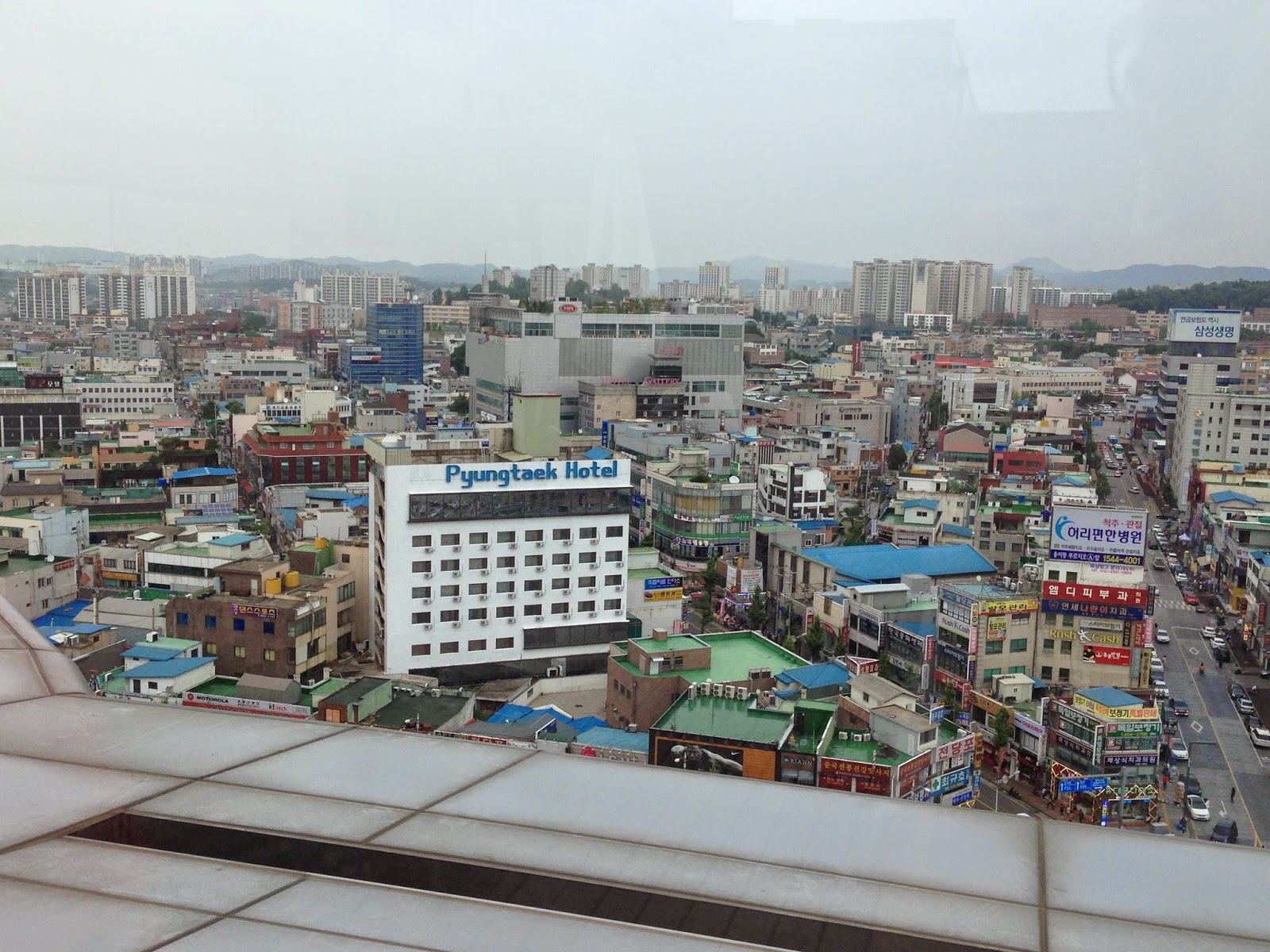 somewhere over the yonder, there is a patch of green that resembles some sort of football field that belongs to the school I teach at. :) It was fun to find that and point it out to my friends.

I couldn't believe the other times I'd been to AK Plaza I have totally missed this rooftop garden. It gave an amazing view of the city of Pyeongtaek and surrounding area and was great to imagine bringing up snacks and drinks in the future to enjoy it even more. 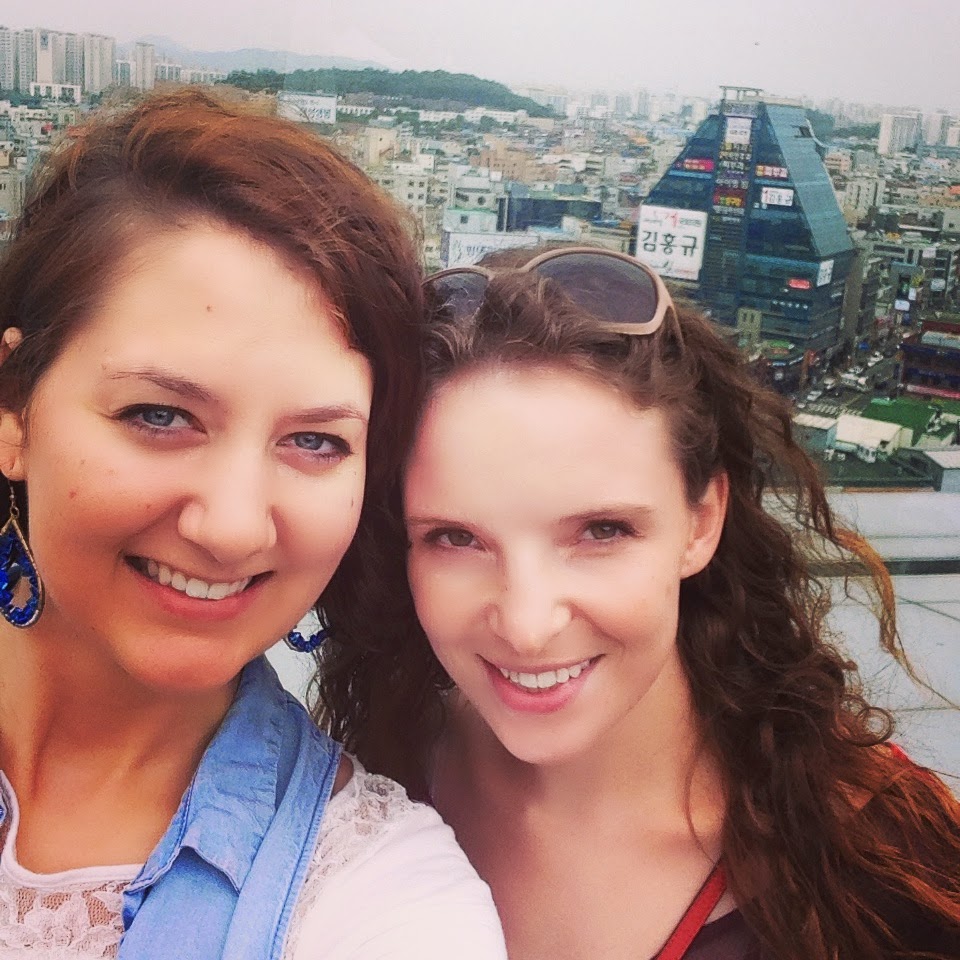 Kory and I met in January, at our mutual friend, Emily's baby shower in Tucson. Tyler and I were on our way to Korea and Kory and her husband Jason joined us this summer. It has been fun showing her around a little bit and even better that I talked them into living close to us over in the Pine House :) 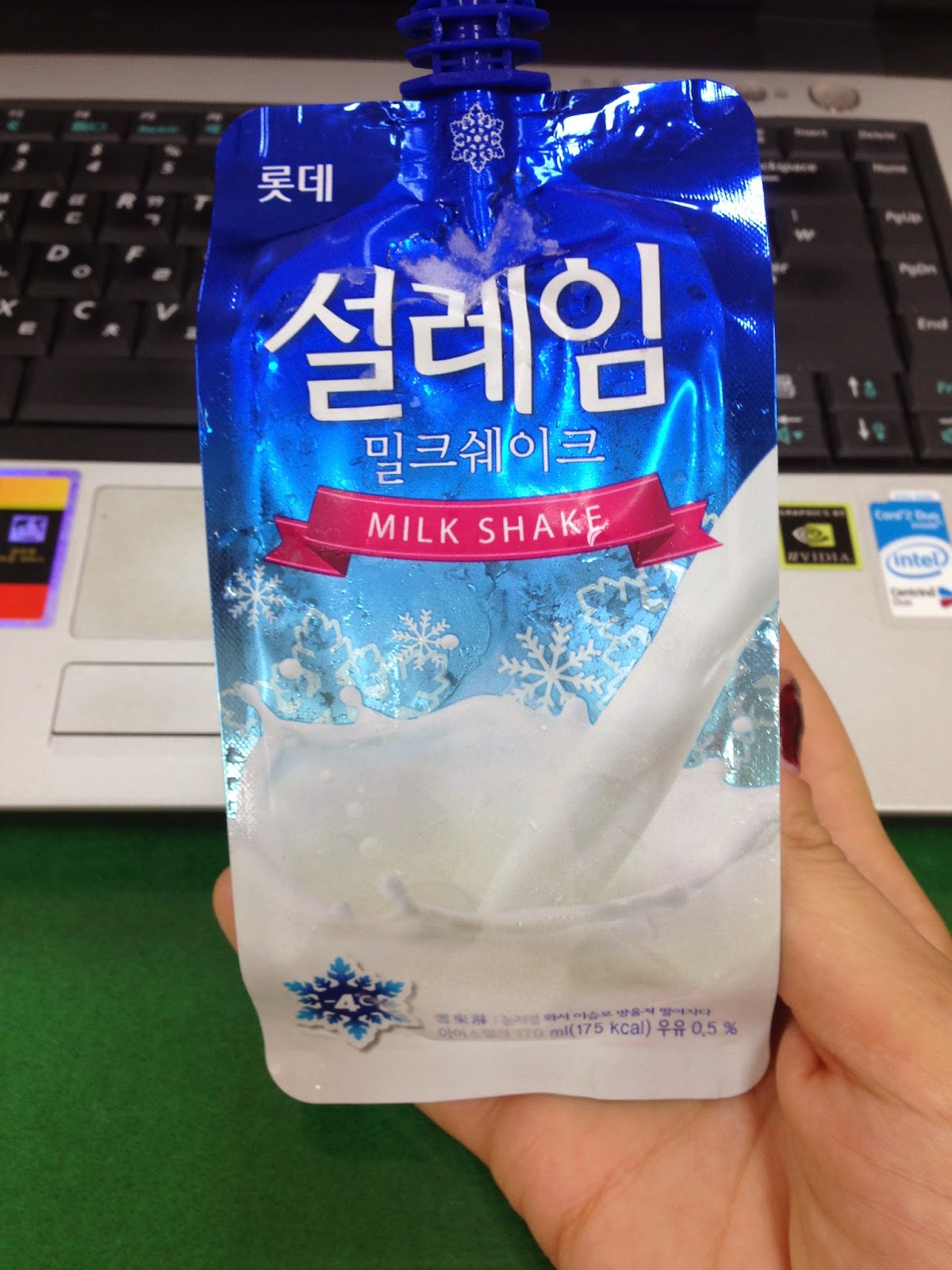 Back in April or May, I was able to go to a rare cultural briefing on base given by a man whose position had been the liaison between the Korean and American militaries in Korea. He spoke Korean fluently and had lived as the Koreans live with his family for quite some time and was very knowledgeable in explaining the vast differences, and few similarities, of our two cultures. It was here that I learned about how important food is to the Korean culture and that eating by yourself is taken as a sign that you have been excommunicated by your family and friends. So while I usually have lunch buddies in the cafeteria in Mrs. Kim and Mrs. Pa, a couple times they haven't been able to eat lunch with me so I've been handed (very politely) off to someone else, so I never have to eat alone and risk the public humiliation that would apparently ensue (not that I would know about it, not speaking Korean and all...) Today's lunch buddy was a guy whose name I knew I could remember, until he said I can just call him "Mo" and prior Korean association went out the window. We talked on the way to the cafeteria and realized that we were nearly the same age, him being born just a month and 10 days after me. Apparently that meant we were friends and he reached out and shook my hand (the first time in all of the introductions I had made that a hand was extended to me) I know that one's age is on the same level of importance as the food thing, so I took it as a great sign that I now have an official "friend". We ate with my faithful lunch buddy, Yung Sun, and I was glad to have someone else in the school who is no longer too shy to practice their English on. When we got back to the teacher's room after lunch, Mo told me that he was "ordered" to treat me to coffee, but he decided that coffee would be too hot and disappeared to the "lounge" side of the room. I didn't know if it was the fact that when we shook hands, he could tell how sweaty I was from the humidity and heat, or if he was sick of watching me take napkin after napkin to wipe my sweaty brow from the spicy kimchi and soup at lunch. Either way, he came back with this pouch and said it was much better than coffee today. The pouch was frozen like a rock but melted very quickly when I held it up to my neck to help me cool down (where were these things hiding?!?) it finally melted and I was able to enjoy the "milk shake" pouch, which was basically sweetened frozen milk. And it was awesome. Thank you, Mo. 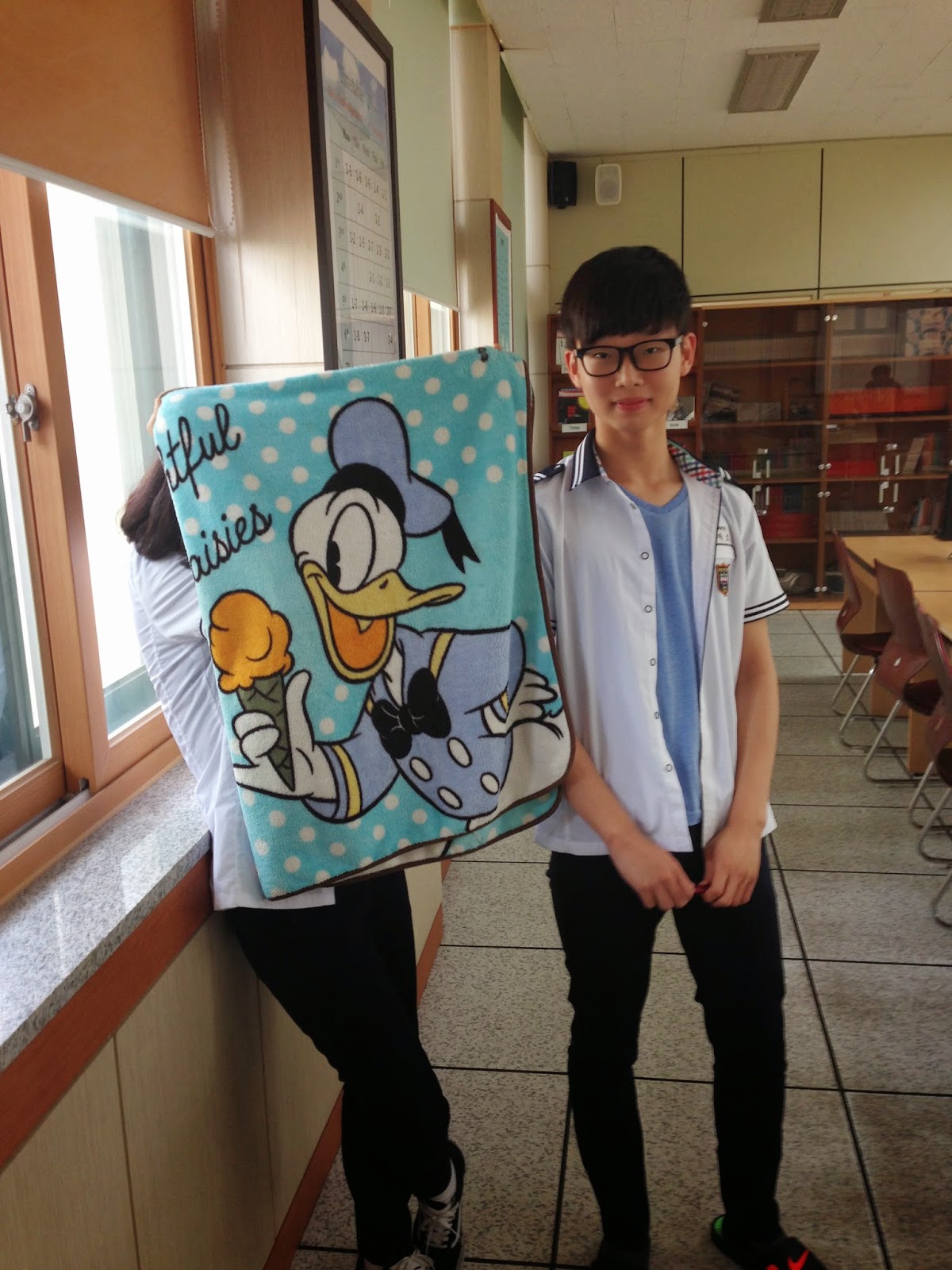 I know you're not supposed to have favorites, but my last class of first graders (16 year olds) on Mondays might just be it. I have never seen a more excited group of kids to play the game "stay standing" and I dare say that after 3 rounds, they still don't fully understand how it works. 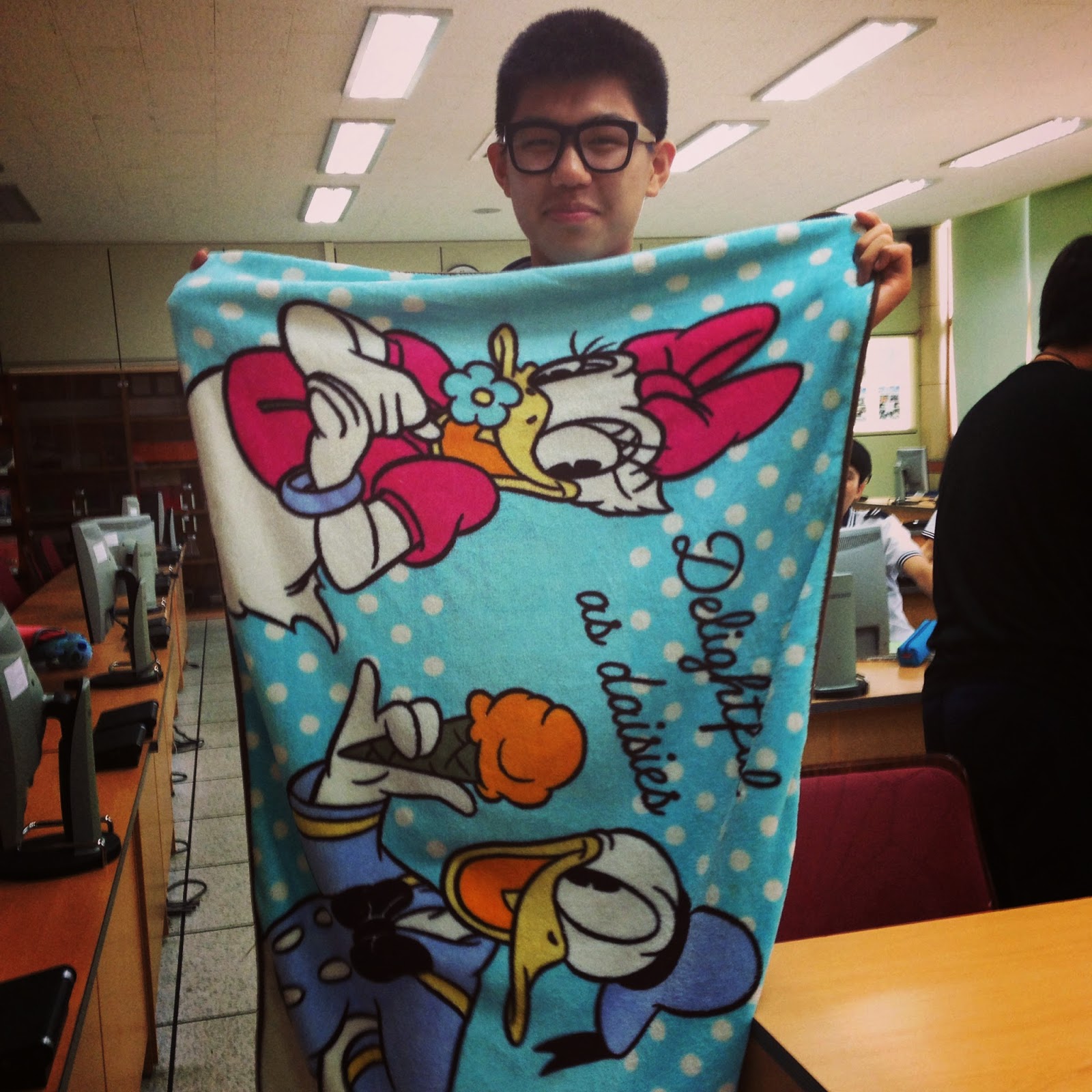 This sweet boy came wearing his friend's blanket as a cape, so I made him hold it up for a picture. He was very kind and explained that he and "many others" were awake and watching the 4am Korea World Cup game so they might be a little sleepy. I told him I understood, but hopefully class was fun enough that they would stay awake. It worked for everyone except him.

Of course, I would be amiss if I didn't acknowledge the fabulous Fiendettes who stuck around this summer, even though our husbands are all away. I have received a couple awesome gifts from my Secret Sister and it is driving me nuts trying to figure out who is spoiling me! Whoever gave this awesome personalized breakfast tray (with both of our names/"call signs") had it delivered to my front door by the time I got home from school last week! 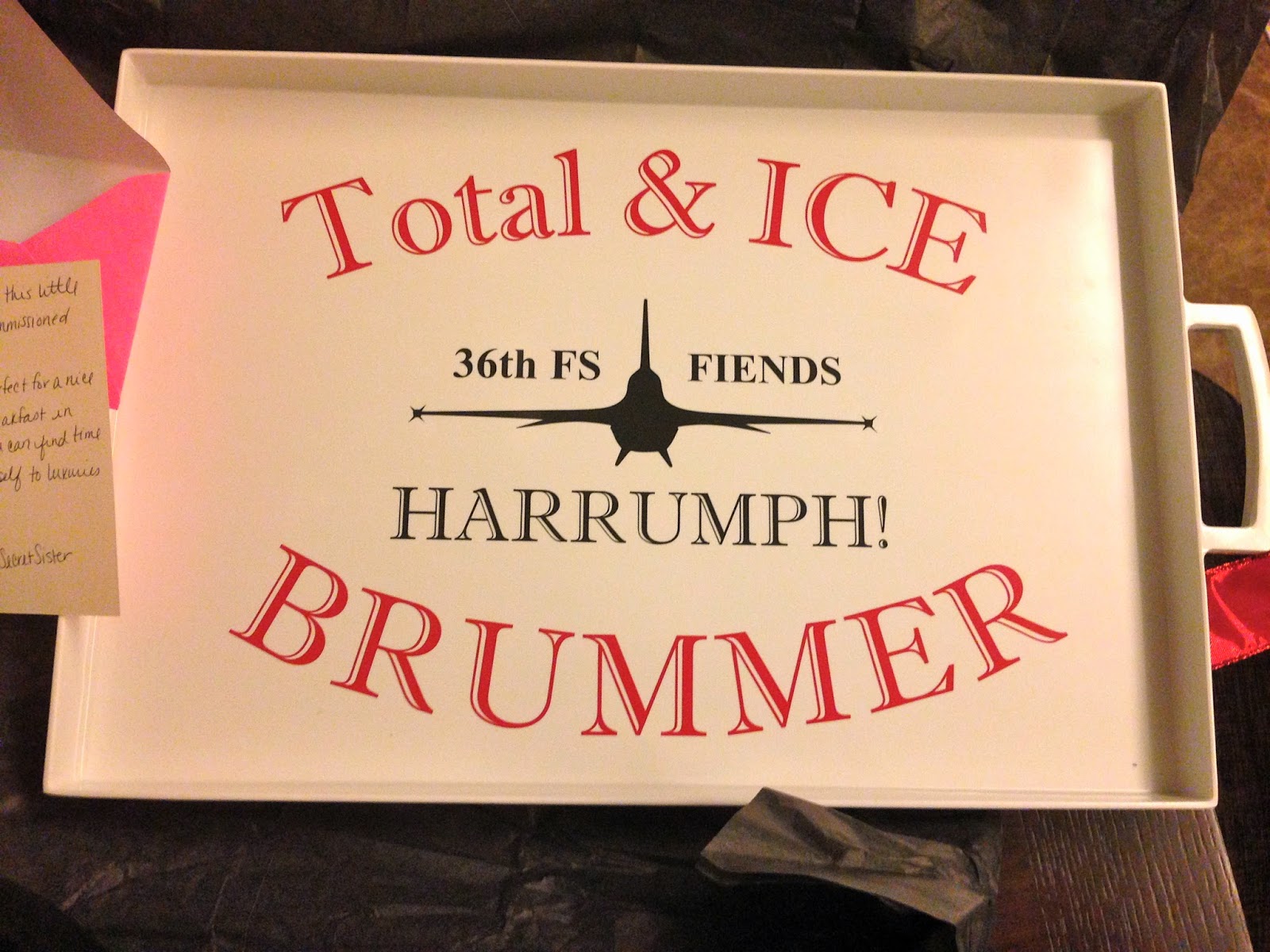 Korea is not without it's quirks and inconveniences (as I had to pause just now and kill yet another centipede-looking bug) but it has grown on me rather quickly. Even saying such today might mean that I risk having a terrible day tomorrow, as things have been going, but I am not the least bit concerned that these students and this country have swept me off my feet.