I ate lunch at school with someone new today, which doesn't happen often. When it does, the following occurs: they let me go first in line so they can talk later about what food I took and how much. They sit across from me and next to Bitna (my sweet co-teacher who is my usual sole lunch buddy) and comment about why I put a little bit of salt on my rice, whether or not I like the fermented soy bean soup and if I enjoy kimchi. Usually they comment about how good I am at using chopsticks, which I know as well as they do that comment is like the southern "bless your heart" - I'm not really good at eating with chopsticks but it's a "oh she's trying" sympathetic comment. They also notice and ask about my water bottle that accompanies me during lunchtime. It's a habit I have, and feel like many Americans do, to drink (or have) a water bottle or other beverage while they're eating lunch, but to the Koreans it is very strange and prompts a series of questions. (Apparently they're taught that drinking water during a meal, or too much after, makes you fat - in reality, I think it makes the food harder to digest, but it doesn't surprise me that to Koreans, drink during a meal equals obesity) This took me off guard the first time when Yongsan asked if I was on some special diet, or if it was special water. I say that I like to have it with me in case the food is too spicy, which is mostly true. They also go on to ask if I like Korean food and what do I think of the food in the cafeteria. None of this lunchtime exchange happens in English, by the way. I sit across from them and watch their eyes to see what part of my tray they are talking about and how I should respond next. Fortunately, for the most part, Bitna and I are treated like lepers in the staff cafeteria and we can usually eat in peace, so I'm not being scrutinized (at least not so obviously) and Bitna doesn't have to explain my barbaric behaviors.

Typical lunch in the cafeteria: (actually, a couple of these were taken on Fridays, when the cafeteria does a "special menu" - the drinks aren't typical. The white blob in the middle picture, top right compartment, is sweet potato salad with carrots and corn). 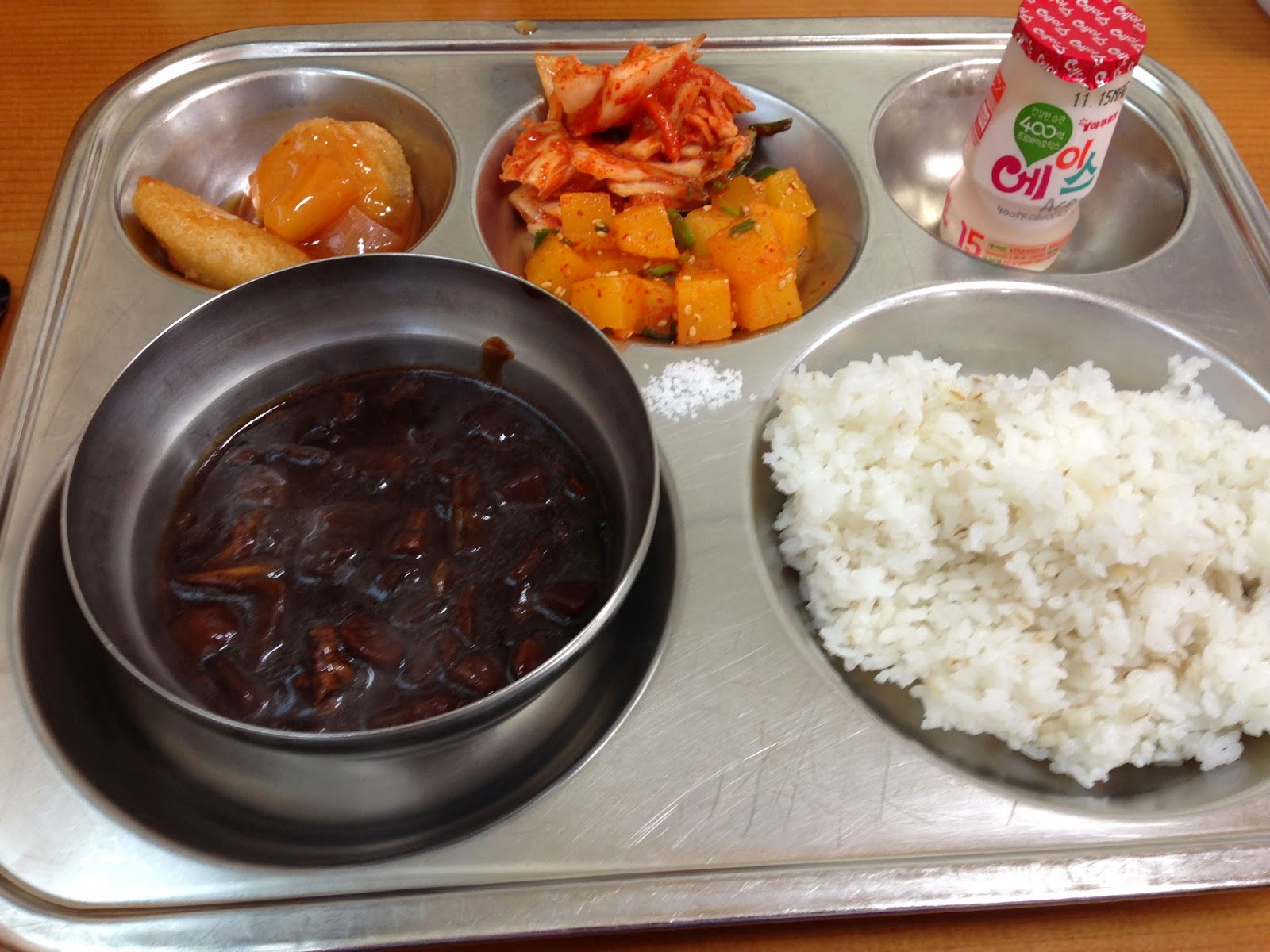 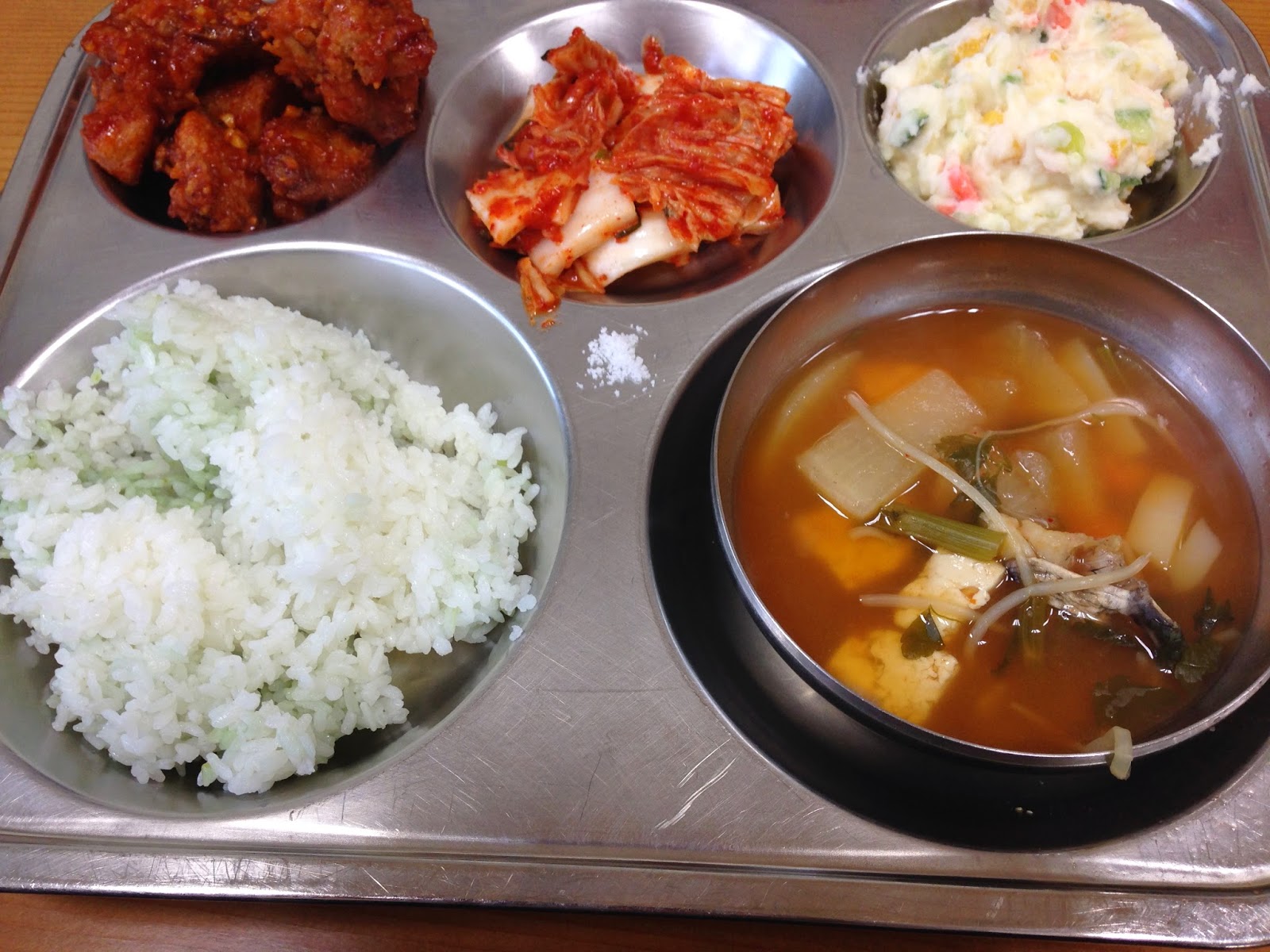 It is so hard to comprehend that I've been teaching at this school for almost 10 months. We just started a new school year (the Korean school year ends in February and begins in March) and I have said goodbye to 160 students and hello to 160 new 1st graders (high school sophomores) the new students are much smarter in English than last year's 1st graders, now 2nd graders. When I introduced myself with the usual "Dan-YELL" and it only took them 3 practices instead of 7, I knew they were special. It's actually a lot more fun having students who understand what I'm saying and it's great to not lose my train of thought because I'm talking so slow. I think we're going to have fun together in the next couple months. If only I could remember their names. I do remember one kid's name- he introduced himself as "Handsome Guy" because his name is "Han Sun Gyun" or something like that. I was impressed with myself for catching him being funny because after 100 kids saying some kind of "Yun Song Park", it was all I could to not be totally spaced out.

Fortunately, it's warming up in Korea and I think spring is right around the kimchi pot. That's a relief - this winter was chilly. It's not that outside was actually too frigid, it's just that everyone treats the hallways as part of the outdoors (as in - windows and doors open) and the classrooms and teacher's room are the only things that get heated. The insulation is non existent, so nothing actually stays warm and if you sit anywhere near a window, you will freeze. It was a weird couple months - November/December through February - teachers were coming to school to sit in the teacher's room (I'm the only one with my own classroom - but I usually do my work on my English computer in the teacher's room anyways) and brought blankets and wore their ankle-length down jackets with finger-less gloves to type on their computers. I didn't go quite that far, but I wore cuddle duds under my pants everyday from the first of November until March. I also wore the same top all 5 days of the week, because I never took off my jacket so no one ever saw what was underneath. I did purchase my own personal tea kettle, which probably saved me. I drank anywhere between 12-20 cups of tea per day, which kept me warm at my desk but also sabotaged my comfort because almost immediately I'd have to go outside (in the hallway) to get to the bathroom (that was of course not heated) and then upon returning be cold enough that I'd turn the tea kettle on to do it all over again. My classroom was a real treat - I had the heat on full blast during the first couple weeks of December but they must have gotten the heating bill because they sent 3 men in to put on a timer, which took all of them a total of 3 days. So from the end of December and even now, my large, non-insulated English room's heater turns on at 19 degrees Celsius (66F) for 5 minutes at a time and takes a ten minute break to turn on again for another 5 minutes. I get a lot of complaining from my students so I taught them how to say that utilities are expensive and the school is cheap. Soon enough the cafeteria will start serving their chicken soup to "cool the body down" and I'll be complaining about the A/C not turning on.

It really does seem surreal that my time at the school is running out. Each one of my classes has at least one kid who is a little bit sharper than the rest and makes me laugh - as soon as one can understand humor in English, it seems like my work is done. When that happens, I am literally thinking in my head: THESE KIDS ARE HILARIOUS. THIS IS AMAZING. I WISH THEY KNEW HOW FUNNY THEY WERE. And of course, sometimes I am screaming the other sentiment: I HAVE NO IDEA WHAT YOU JUST SAID BUT I CAN TELL THAT YOU JUST MADE FUN OF ME AND I WILL MAKE FUN OF YOU IN ENGLISH AND LITERALLY NO ONE ELSE WILL UNDERSTAND AND I WILL LAUGH AND IT WILL BE FUNNY. In those moments, I'm not so high on life. But, the latter seconds are more rare, and even then they're fun in their own right. I know I'll laugh later at the kids who knocked my coffee mug over but were too shy to tell me.

In the meantime, Tyler has had a pretty busy schedule at work since he's going through an upgrade. I haven't seen him during the week in a while, but I know he's coming home because the food I cook disappears slowly. Next weekend, I'll be heading up to Seoul for a Fiendette girl's weekend aka "Pink Flag". I'm super excited to be in Seoul for a whole weekend and to get some good shopping in!

Thanks for stopping by - maybe next time I update I'll be able to say where our next assignment will be!
Posted by danielle at 8:34 AM