I'd be lying if I said after 3 months in a foreign country, the adjusting is over. Just today I walked into a Korean bank, showed them my ARC (alien registration card, the reason I have taken several trips to the Immigration Office via train) and after about 15 signatures, walked away with what I believe and hope is a Korean bank account in order for the school to pay me. Although I could have signed a mortgage for the building next door and never known the difference.

There are days I hardly notice we are a world away from everything we've known. Days when I can see the sun (as opposed to the majority, when the smog/humidity covers the only known source of light), days when the kitchen sink (without a garbage disposal) doesn't clog and stink, days when a walk around the block with Ada don't include people of all ages being scared of her 40 pound ball of cuteness and days when I spend a large portion of my morning texting (although now it's called "kakao-ing", for those of you who would like to join in) my siblings and parents. The days I can show my ID to be allowed on the American military base are comforting-I don't have to think twice about the rules of a crosswalk, or the parking space being large enough, or having to back up, adjust, and go forward several times just to go up a parking garage level. I also don't have to worry about the road signs being in a foreign language and guessing as to whether I can turn left on green. Of course, the speed limit signs are in kilometers, which conveniently match up with my Korean car's speedometer, thank goodness.

Of course, there are also many days when I find my head spinning and am forced to focus on big-picture, instead of minute logistics. One of these days, or evenings, happened a few weeks ago, when my charming husband was out of town with the rest of the squadron for a two week TDY. There were many fun activities planned to keep us wives busy, and one of those included seeing a 4pm showing of the new Captain America movie (in English, with Korean subtitles, thank you very much) and going out to dinner afterwards with a couple of friends. The "plan" was to meet at the large apartment complex where a lot of the people from the squadron live and figure out who was driving from there. I volunteered to drive, simply because parking at this particular apartment complex was annoying to me. In my mind, there are several underground garages (in reality, after stepping back and really thinking about it, there are just two) and each one looks the same, is ginormous and is rather hard to figure out where the car was left and making sure you come out and resurface at the same place. So, I avoided that altogether and chose to drive (our "new" Korean car, by the way) so me and two other girls traveled to the city with the movie theater, (which is in the big complex/mall where Tyler and I spent his birthday) about 15 minutes away. As we got closer, I recalled how annoying it was to find a parking spot the last (and first) time we had visited, to which Andrea had assured me wasn't a problem because she had "great" directions from Annette for the parking garage. However, the parking garage turned out to be rather elusive, as we kept seeing the garage, but no way to reach it. Numerous times we found the way "out" of the garage, but never the way "in", of course running into the train station, bus terminal and taxi station along the way. Noted-next time, take public transportation. And then, in a moment clearly sent from the Heavens, we spotted a parking spot, literally right next to the plaza. There was even a spot on the street behind us for the other car in the group. It seemed too good to be true, but surely, was simply good fortune.

We went on our merry way and enjoyed an amazing two hours watching Chris Evans and his crew of superheros, followed by delicious Indian food (served by Koreans, of course) and great conversation. Our night came to a screeching halt when, on our walk back to the car, realized that my new car wouldn't be going anywhere. 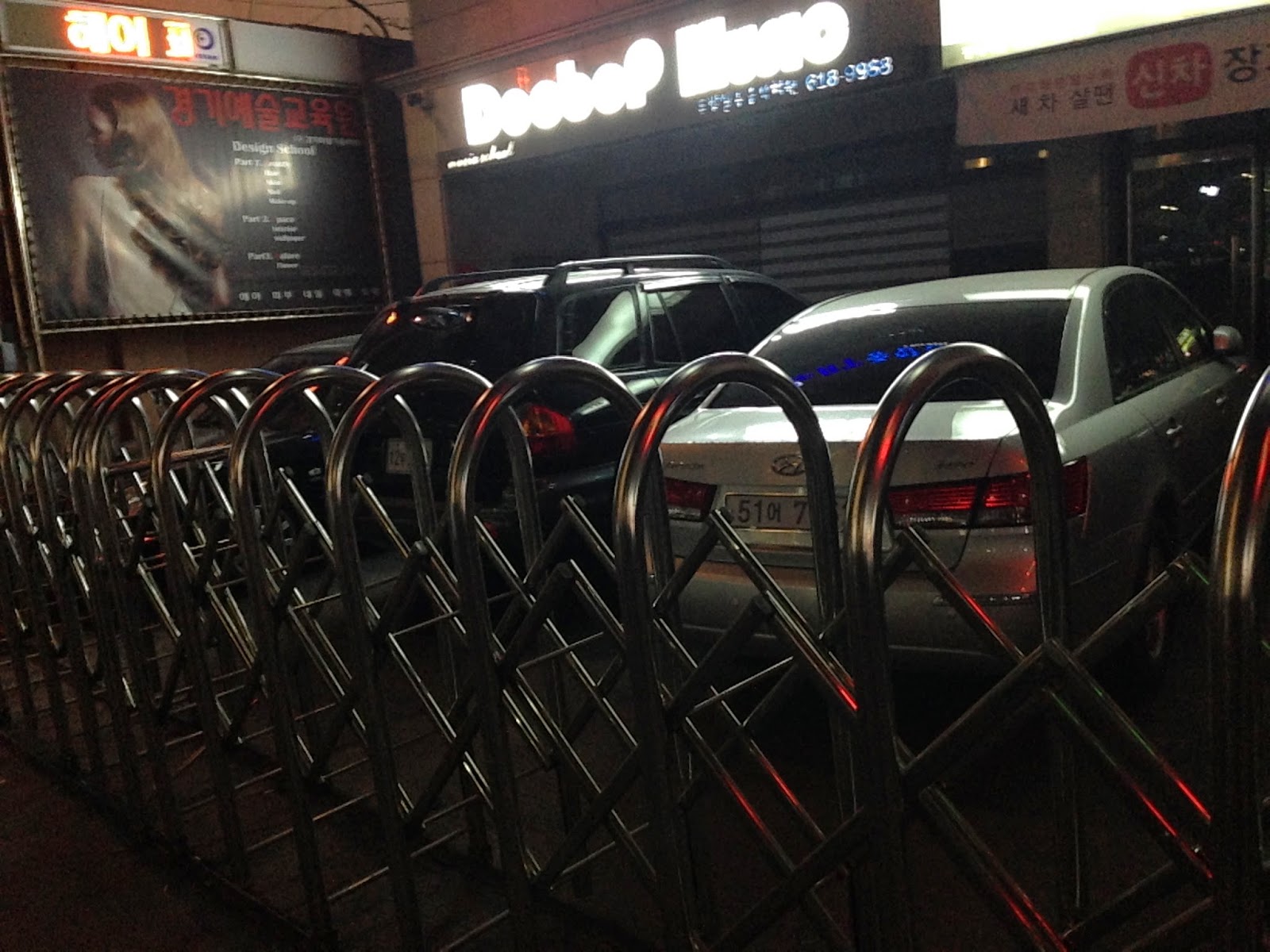 The three of us did a double take as we realized that we were, in fact, in the correct spot, looking at the correct vehicle. What didn't make sense to us was that a seemingly harmless (and rather available) parking spot had turned into a parking lot, that can be blocked off rather easily with a formidable gate. After a few stunned moments, we looked around for a solution to get the car out. Of course, a couple cars passed by and they all pretended to know nothing of the English language. Considering our location-several blocks away from the restaurant we had just eaten at, right next door to the shopping plaza and movie theater, but also rather close to a very "questionable" street, famous for "women dancing in the windows" We thought of alternatives, which would be getting on the train and coming back the next day to a hopefully open parking lot. 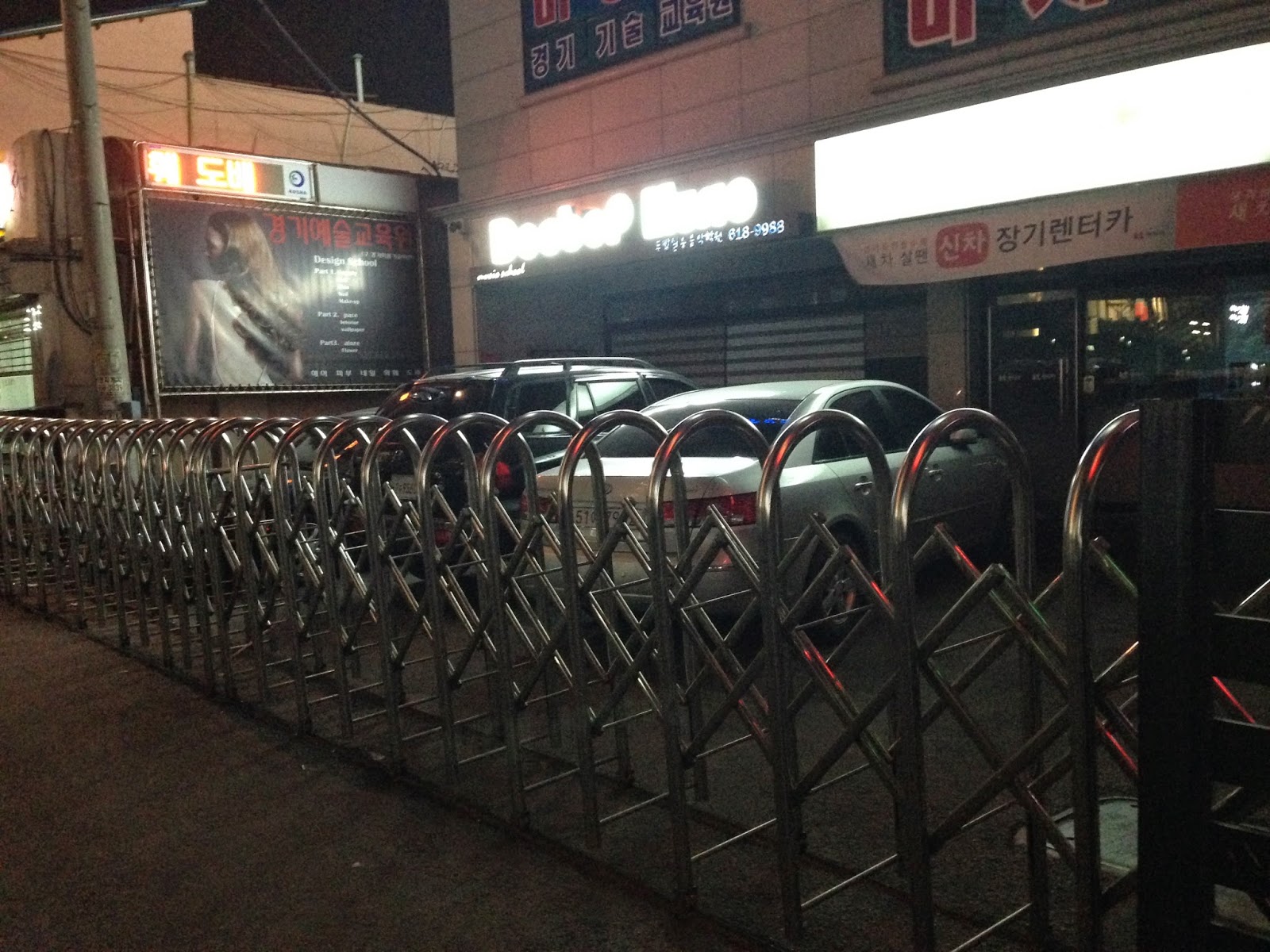 I wandered to a shop a few doors down from the "lot" and fortunately, the light was on and the door was open. I turned to the girls to make sure they knew where I was going when I saw that a man had stumbled up next to them. I motioned for them to ask him, and they quickly shook their heads that it was a bad idea (he was quite unable to give coherent advice, let alone in English, apparently) I proceeded to open the shop door, which turned out to be a hair salon, and attempted to explain our predicament. The hairstylist yelled upstairs to a man, who stumbled down in his pajamas and slippers. I did the usual pointing and simple speaking (slowly, of course) and he, like a good Korean, got his phone out immediately. After a while, we realized he had called the number of the car rental place (?) that had likely locked the gate and we had figured out the gate would be opened at 9am the next day. The three of us were very relieved, and had conceded to hop on the next train to go home, when someone thought to ask him if he could maybe find out the padlock code that was keeping the gate closed. He seemed to realize what we were saying and after a few more minutes motioned for us to turn around. We gave him his privacy and before we knew it, the gate was open! I was able to back the car out (doing an Austin Powers 7-point turn, of course) and we thanked the nice man profusely.

We rode away relieved and feeling rather victorious at another Korean predicament-turned-accomplishment.

Also...I just wanted to share with you a couple pictures of the beautiful spring we've had. 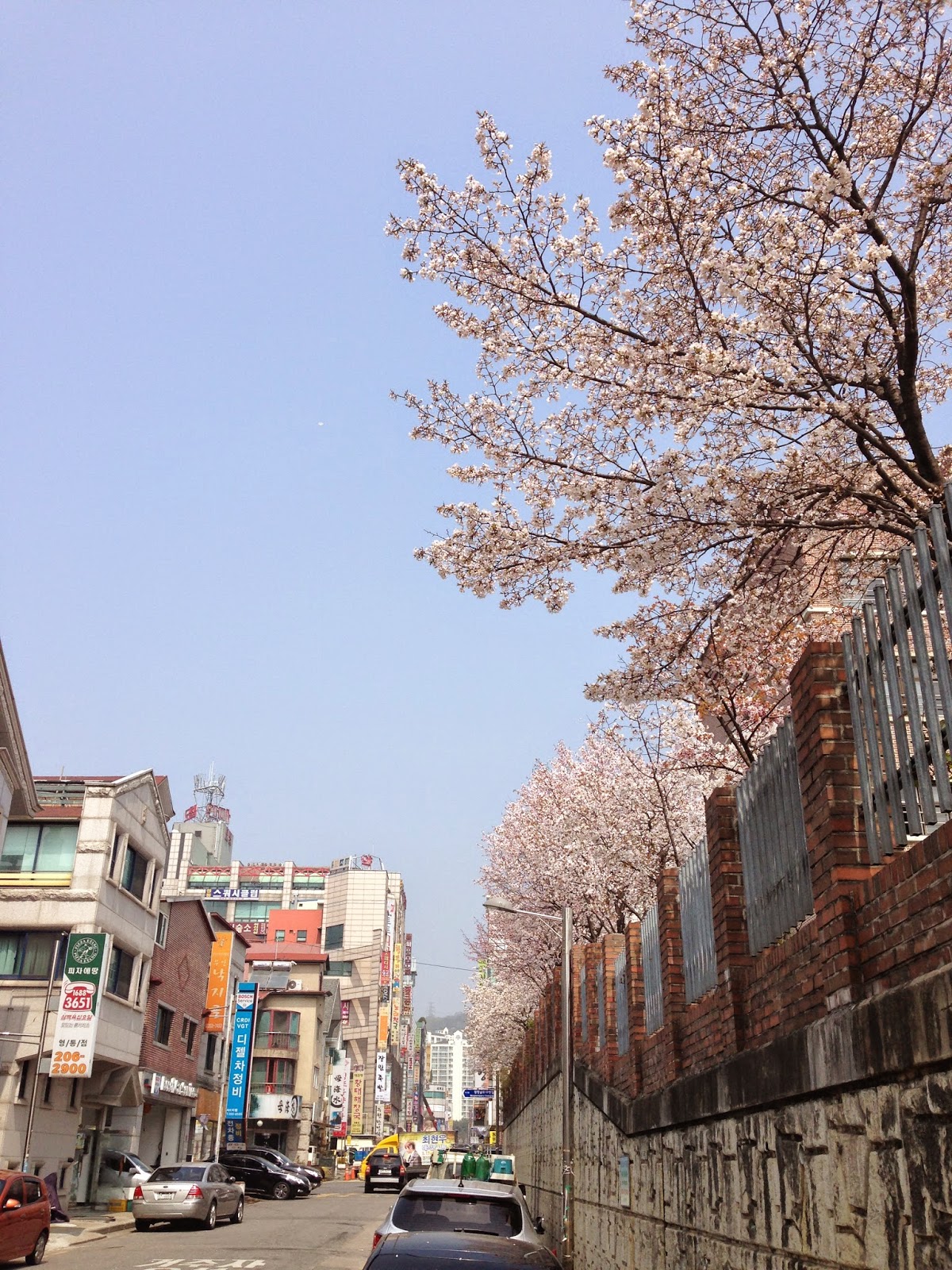 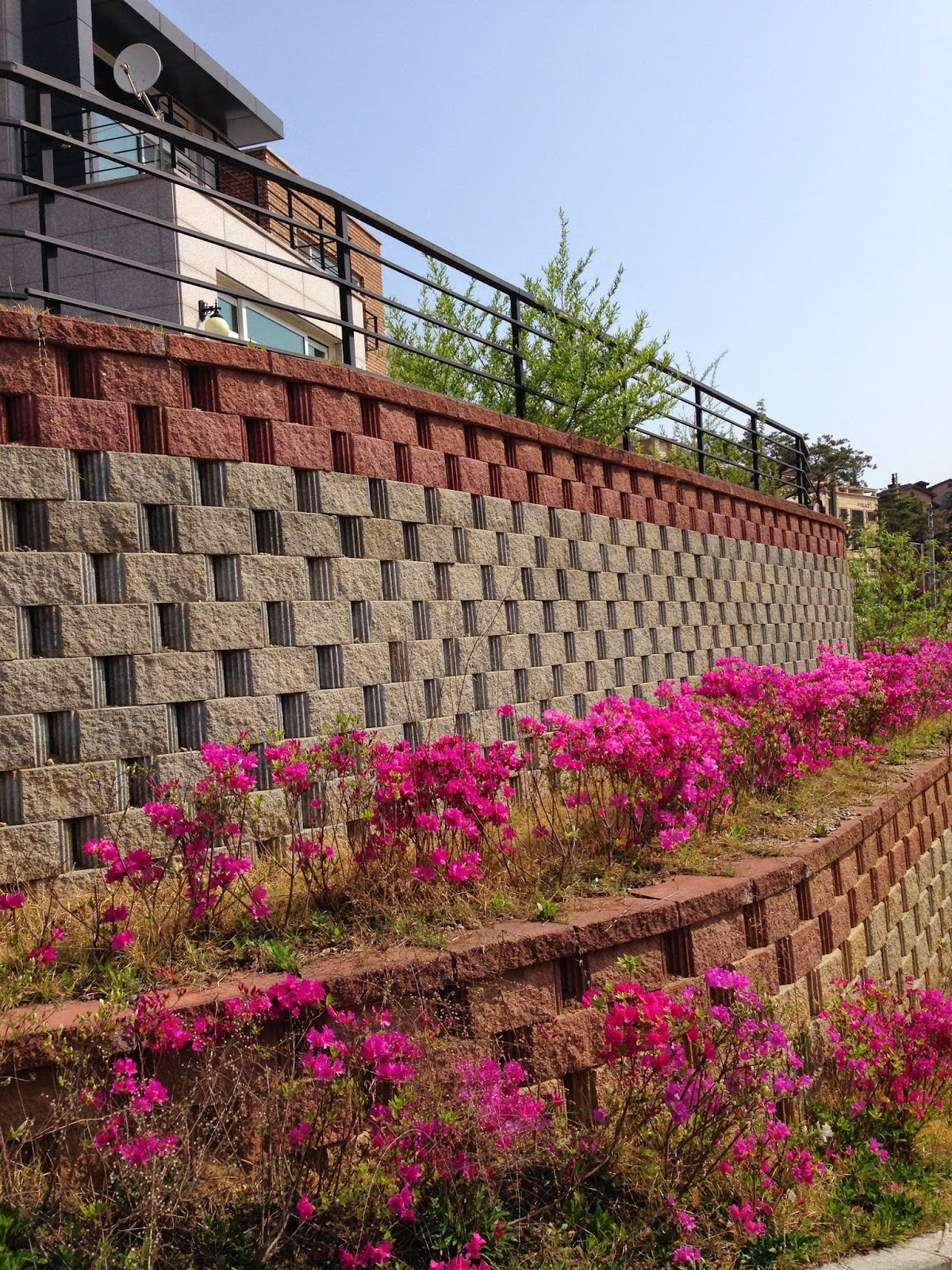 This second one is right in front of our house. Of course, after I took this a bunch of white blossoms appeared and then disappeared before I could take another picture. Turns out Korea really is pretty!
Posted by danielle at 9:19 AM

Just read this blog and had to gasp! You need to write a book!!!
Aunt Mary in MN