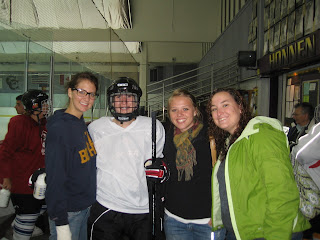 yep. the roommate from michigan plays hockey. can you say biggest fans? (or only fans...? in the whole arena...?)

okay, megs... :) since you and sara and probably the only ones who will ever read this, i will cater everything to you two. (and ps. meghan...i'd love to chat with you about that particular something i think you're referring to but maybe not over the world wide web, eh...?) :)
here's some pics...but maybe you've seen them on fbook...? either way...CO is great. i don't think i'm ever coming home.
some highlights so far: realizing my minnesota lungs are not quite colorado-friendly and those two pairs of hiking boots may not be as worn is as i'd imagined...a root beer keg birthday party that i single-handedly turned into an '80's prom (for myself)...SPEED SCRABBLE...TELEPHONE CHARADES...(both games we're playing at thanksgiving, mmk?)...our wacky wednesday supper for the boys...root beer float night...telling the great doc dob that i liked his tie. his response? "you do?! it's 30 years old!" we called it even with a handshake...the barn dance this friday (it hasn't happened yet, but how could it not be an instant highlight?)
okay...that's enough for now...you maybe stopped reading...
oh yeah--this pic is from the Air Force football game...i should have included this in the highlight list. I even got sunburned! gotta LOOOVE the hot CO sun! :) 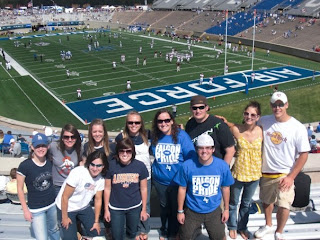 that's it for now--i can't figure out how to load the pics without it turning gay on me. kisses.
Posted by danielle at 12:50 AM

yep it's not even 8 in the morning and i'm already in blog heaven. didn't think i was that obsessed with checking up on your life? you were wrong. love ya girl! looks like you are having a blast!!!

oh my gosh. I'm so excited about finding your blog. i love this:))) (I can't believe i didn't know about it!!)