Last night I was stuck in a trance watching the history channel. they did a two hour documentary on hurricane katrina (no, i did not watch all two hours).
In most of my college classes i looked at case studies that happened to a small company or a scandal years ago that no one remembers or even fictional, "what if" cases. i did, however, have the privilege to take a course closely examining the discourse and politics of hurricane katrina. since then, i have been fascinated with the catastrophe. i wish i had read more of the book and not returned it 1/2 through the semester because i wasn't reading it...but it was probably my favorite class (if i had to choose).

we studied so many different aspects of the event and when i watched that documentary last night it all came back to me. i remember feeling guilty during class for pausing at the televisions broadcasting about the storm, but never taking more time or energy. i remember my two friends (that's you--danielle and stephanie!) taking a trip to help with relief efforts. i remember watching oprah and seeing her building "angel lane" (right here in houston). i remember hearing about looting and crimes in the superdome, and wondered where a person's self control can go when they have nothing left. and then i remember thinking. they have nothing left.


Earlier this week, we watched Brad Pitt on World News Tonight speaking of his housing project...low income, energy efficient homes. http://www.makeitrightnola.org/ A great idea. these houses look amazing next to each other, it's a neighborhood that has brains. next door and down the street, however, there are still abandoned properties and houses that were gutted by the flood. i asked tyler why the city doesn't clean those up and bulldoze them since clearly there is no one coming back for them. (Imagine the cockroaches in those!!) he said simply that there was no money. the city and the state still don't have the money to clean their home up.

tyler and i attended a wedding in Gulfport, MS the first weekend in may. to the left o 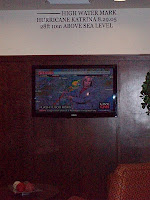 f the highway exit was a normal residential area, to the right, a mess. traffic was backed up and we cringed just thinking about getting through to find our hotel room. then I remembered. Gulfport. Buloxi (just 10 minutes down the road). katrina hit these towns the hardest. wiped everything out. i started looking around with a different awareness. my eyes got bigger as i realized the road construction and rebuilding were from the disaster nearly five years ago. driving down the road to our beachside hotel was surreal, even eerie. we didn't spend much time at the beach that night (if anything, we wanted to see it in case of the small chance we'd eye some oil), but it was there. the waves crashed and seemed playful, even taunting. we said goodbye to the coast and called it a good trip.

my heart is heavy when i think of the lives that were lost five years ago. my heart is also heavy when i think about the legacy that will forever be associated with katrina. there is no perfect response. we've heard them all...good and bad. if i had to tell you what the people of new orleans need now, i wouldn't be able to. i only wanted to share my thoughts on this natural disaster-turned-scandal-turned-memorial. thanks for listening.

What a great post. I think its important that we are reminded of these things so we can learn from them and help! There is still so much we can do!

Think about Haiti! I feel like its out of the headlines, but its still so important that we remember them and keep them in our prayers.

My son and niece and nephew pray every day for the people of Haiti! It brings tears to my eyes that these three young people remember them every day but so many others have already forgotten!

thanks for posting this hohdan. this is something that's been on my brain for awhile. where do we go from here? there's so much that still can be done - but why isn't it? miss you.