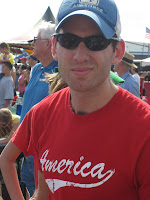 i mentioned earlier that tyler and i went to the houston air show last weekend.  i have only been to one other air force air show (i think i remember seeing the blue angels once while i was younger, but i mean...navy planes...?  psh... [ahem...just kidding if you read this, erin...] i can't help that i'm partial, can i?)  but that was last may and since tyler being in grad school means we've been out of the air force loop for quite a while, we were pretty excited to see some of America's finest.  the Thunderbirds put on a great show and we certainly weren't disappointed.  we also had some great company... 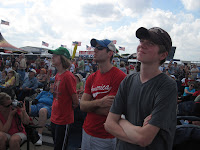 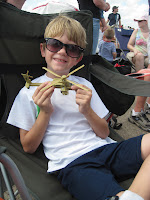 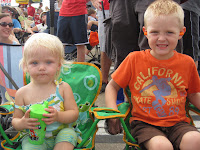 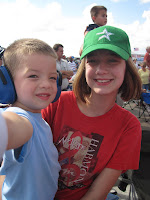 see?  :)  we saw some cool airplanes, got to stick our heads in a B52 and won some free stuff at the booths.  the countdown to pilot training has begun and we're both getting pretty excited!


apparently halloween is this weekend...i pretty much forgot about it (hard to believe, i know, considering the myriad of decorations and costume stores that appeared out of nowhere months ago)... we might get all dressed up and find something to do, but it might take us too long to decide.  we'll see.  alright, laundry load 2 of 3 is done and legally blonde just finished on the bravo channel.  happy weekend!
Posted by danielle at 9:00 PM