earthquakes and other texas storms

the storm is coming.
yes, i took the picture below while driving.  and yes, i was annoyed to be stuck behind two tractors going 40 in a 70.  and yes, i was very glad to have something to take a picture of.  thanks for asking.  the storm we've been hearing about for a week is on it's way.  and while i believe that the great city of wichita falls, texas can experience earth-shattering storms, since we've been here, we've heard countless warnings of such storms and never see even one.  but we did have an earthquake on saturday night, the first one i've ever felt and it was pretty cool.  actually, i'd like to say i responded with a little more clarity/wisdom/excitement but mostly i was just dumbfounded and said nothing until it was over, then admitted to thinking there was a (very large and angry) cockroach/armadillo/jackrabbit hybrid that had somehow inhabited the chair i was sitting in and decided at that moment to make himself known.  one of my finer moments, i assure you.  but alas, just an earthquake.  whew. 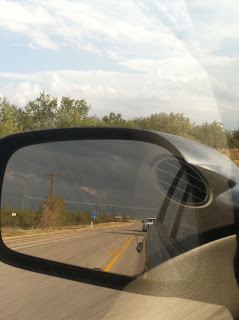 on to bigger and better things.  like what i made for tyler's post-solo flight supper last week (remember when i used to post awful photos of mouth-watering food?)  well i have been waiting to try this recipe and decided last thursday was the perfect night.  let me tell you, it.did.not.disappoint.  granted, we were rather hungry, but it created in both of us a new found love of bleu cheese (which always makes me think of my college roommate, sara, because i used to get a salad for lunch/supper at the dc at bethel and pick off every bleu cheese chunk and give to her..:)  anyways, the combination of the grilled (after boiling) potatoes and slightly melted cheese with the steak smothered in Worcestershire sauce was fantastico!  and it's making my mouth water again.  try it, please, for the betterment of the world, or at least your supper repertoire.  and then tell me how you liked it.  here's what mine looked like: 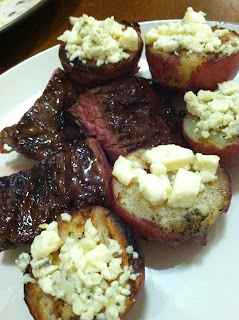 next on the list.  i'm about to reveal a secret that i have not yet disclosed to the world wide web of wonder because i would like some help (whine, wimper, plead).

tyler and i have decided to get a dog (yayyyyy!)

here is our problem: we each would like different dogs and have been civilly discussing it for mon-ths.  and we've finally come to terms with the fact that neither one of us is going to bend, break or snap.  so we've moved on.  we're not getting a golden retriever (tyler's choice) or a belgian shepherd (my choice).  here are our conditions:

the dog must be medium to large in size.  color not really an issue.  i would prefer a guard/watchdog but we both don't want the dog to be vicious with strangers.  (and at the same time, friendly with children, you know, just in case)  i want a dog that will help me get into running (shudder).  a hunting dog is not off the list, but would probably not be used too much for that, at least not now.  we aren't afraid of training and will give it plenty of exercise, so those are not issues.  i've been doing a nerdy amount of research and while we're not opposed to going to a breeder, we've also been to the animal shelter here in town.  we're being snobs, though, and want a puppy and apparently a lot of shelters don't take puppies because they come with diseases(?)

i tread lightly here but while it nearly broke my heart about the dogs at the humane society, i will never care more about saving the life of a dog/animal than that of a child/person.  that's just all there is to it.  (and according to the World Vision Christmas gift catalog i got in the mail today, there are plenty of children that need our time, money and energy)  okay, that's it.  i'm done.

back to the dog thing.  this is where YOU come in.  what kind of dog do you think would be good for us?  what kinds of dogs do friends of yours have?  what type of dog would you like to have?  i have come to my last rope in researching.  ready, go!
thanks for the help and for stopping by.  also...since i've started this and gotten to these words, still no storm.  have a great week!
Posted by danielle at 4:44 PM

ok seriously, we LOVE our dog lizzy (old english sheep dog). we shave her because she gets so hot but let her grow it out a bit...but not all the way down to the floor like the show dogs. the greatest part is that she doesn't shed. it's amazing. she isn't hypoallergenic, but she barely sheds at all. that's basically what i look for in a dog....does it shed? lol so exciting that you are getting a dog! that is great! can't wait to see what you pick!

Okay my dahlins I have a suggestion. An English Springer Spaniel. There is one issue with them, they are quite energetic for the first year or so. They are very bright and very very loveable. We are on our second one and he is wonderful. They are hunters is you want one. They are wonderful with children. They are a very special dog. They are the owners dog and friend. They put out a good bark to strangers but as soon as you pet them they waggle all over the place, I do think if you were in jepardy they would come to your aid, but they are not agressive naturally. We have had a black and white one and our new one is tri colored. You can actually see pics of both on my FB. Good luck...

But if I can't get my wish of a baby for you guys I would say a boxer. I know a lot of people who have had them and even had them with small children. Def look into if a boxer would be a good fit for the two of you guys. If you ever want a small dog though I highly recommend yorkie poo's that are 3/4 yorkie 1/4 toy poodles. Baxter is amazing and everyone I know who has had a yorkie poo has loved them and Baxter has made many people who don't like dogs like them if they are like Baxter.

Alright, here goes ;-) Great Dane all the way...lol Ok so they're not the best for running. Although Dane does run with Cali. They're not really built for it. However, they're fantastic guard dogs (always aware of someone coming up the driveway and very loyal). They're an extremely chill bread. She's lovey enough (would cuddle in bed with me for as long as I want) but content to be in a room with you and sleep till play time. We love our Great dane.
But the dog I would look into (if you don't mind exercising) is a Vizsla (pronounced Vee-shla) they are the cuddliest dog's you'll ever know. Family friendly and just plain sweeties. They also are a sporting dog and can be used for hunting. Look them up on-line for sure. I think they match all the desires you guys are looking for. Good luck!

You want a small white Maltese called Astro :) I just so happen to have one that Channon would be glad to give you.