yes...it's true that I haven't updated my blog in nearly three months. for the record, I did try to update on March 3rd and gave a thorough and insightful post regarding my ending job at the elementary school in Wichita Falls. but my internet went out while typing and didn't save, which I didn't notice until I lost everything. in bitterness I haven't been back since. however, since then, we have moved states and can no longer call Texas home. we love Tucson so far, but everyone's detailed warnings about the rattlesnakes have got me...well...rattled and I pray to God that I will be the miraculous exception and never see one. we moved out of our house on base in Texas and went straight to Fort Myers to visit grandpa and grandma-Tyler had never been to their condo before and his 45 days off between assignments brought the perfect chance for some traveling. we enjoyed (as the pictures indicate) a trip to watch the twins at spring training (it's been a long time but this might be the year I get to see the twins play in both Ft Myers and Minneapolis), a couple beach trips, happy hour and golfing and spending time with my grandparents, who make great tour guides.

After flying back to Dallas, we drove to WF for the night to pick up Ada (who got one final sleepover with Maya) and be on our way West to Tucson. We arrived and spent two days looking at houses until we found one we fell in love with on a Friday. We signed the papers that next Monday, got our keys Tuesday right before the movers came with our belongings and left Thursday for 11 days to Montana and South Dakota. We spent Easter weekend skiing at Big Sky with family and then drove to Rapid City to spend a week there. Finally, we were back in Tucson on April 8th and have been getting to know the city a little better. 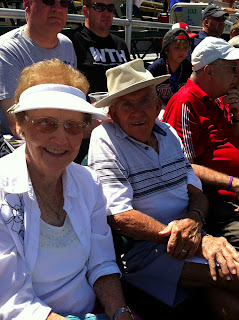 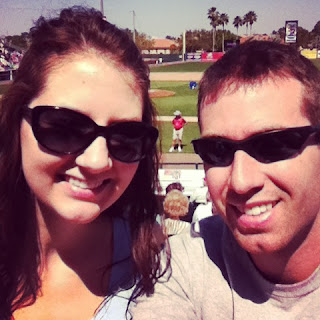 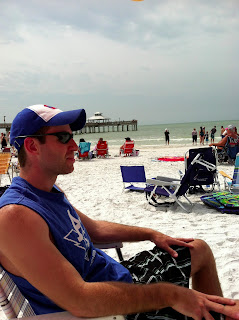 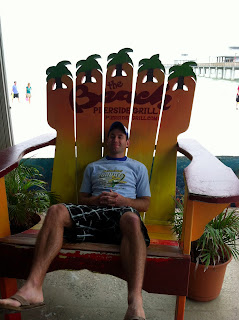 I couldn't resist snapping this picture on our drive...it's just perfect! 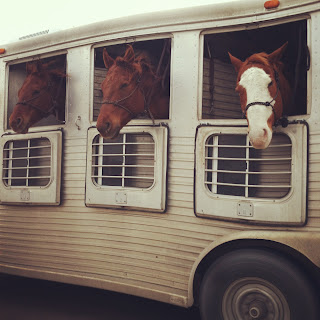 We shipped our skis up to the lodge in MT to avoid dealing with them at the airport. The guys at UPS were not impressed with Tyler's original pack job, which did not include boxes and was soooo much more ghetto than even this. 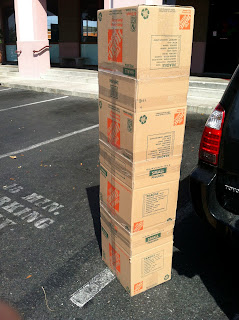 It's been great hanging out with Kristin here in Tucson! She is busy finding a job and apartment for their upcoming move back to Norway, as well as planning her wedding but she still makes time to meet me for lunch/shopping/coffee, which I love! 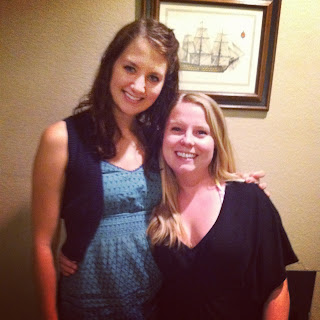 Little Avery is such a sweetheart and we're so glad we get to see her often until they move to Japan in July. 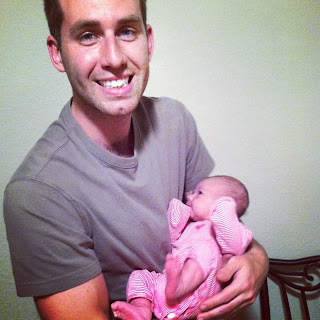 Here's the front of our house! We were really drawn to a particular neighborhood East of Tucson with unique yet classic southwestern style adobe houses and have loved how quiet it is. 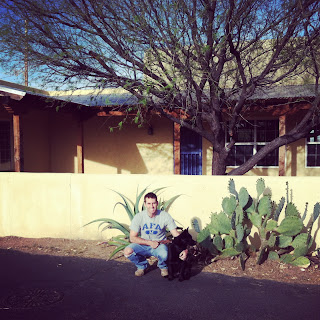 seeing this picture again stresses me out but I am proud to say we were 90% unpacked before Wednesday night. whew! 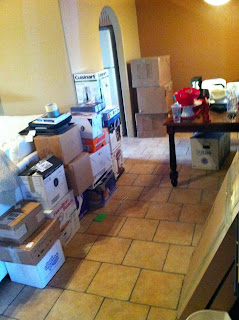 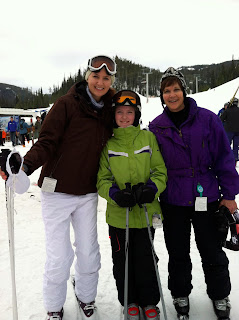 the weather was just perfect and after day one of skiing in my new boots and skis, I was warmed up enough to actually enjoy it! 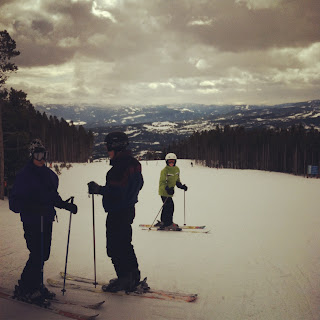 it was so fun for Tim to show us around-we're so glad we finally got to ski Big Sky! 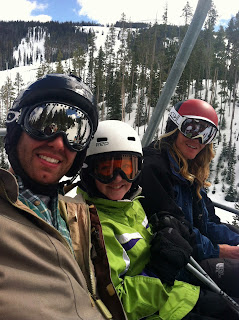 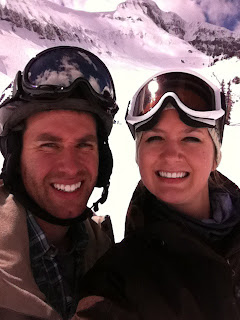 the sunrise service on Easter Sunday was incredible 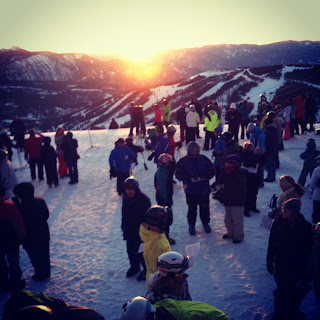 our trip to Rapid City included much golfing for the men and a fun trip to get pedicures for us! 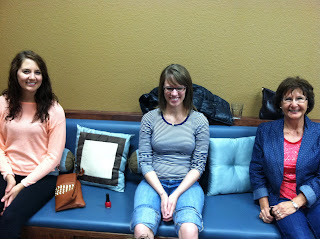 out of order, but this is the whole group at supper during the ski trip 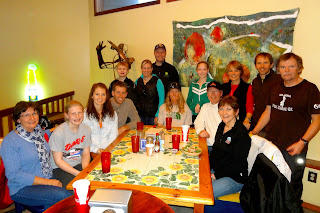 the ice cream guys at the shop 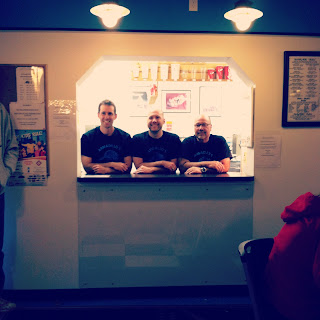 Mike introduced me to my new favorite thing-a salted caramel malt. I proceeded to have one a day for five days without getting sick of it. 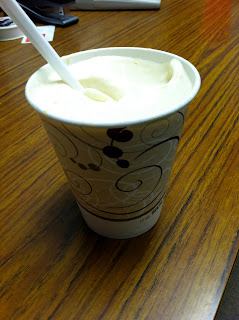 our killer craigslist find-I was a little stressed out by the kitchen at the new house being half the size of our former but this solves all those problems. plus it's adorable. 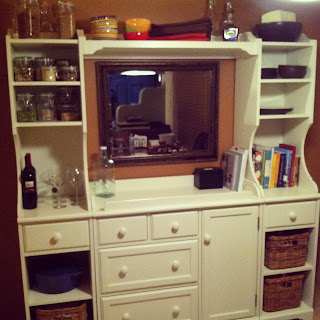 I snuck this picture while I was cooking to show off the beautiful fireplace and our great new rug but also so you can see what a great husband I have. :) 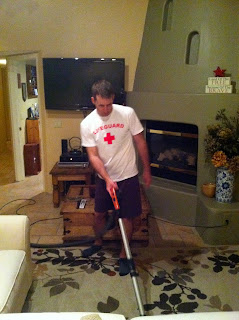 Our first hike in Tucson was a toughie-we only made it about a mile uphill but it was brutal with the rocks and incline. The view was quite spectacular, though. 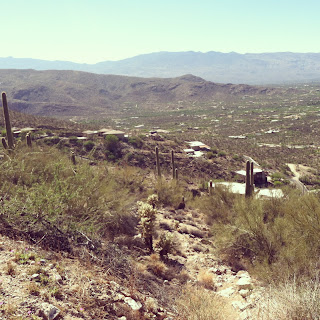 It was so fun having Amy, Roman and Maya visit us for a few days from Phoenix! This handsome little guy is almost a year! 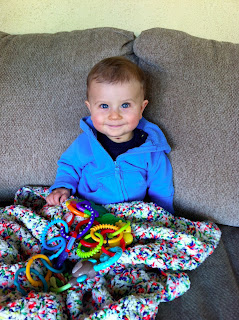 And then I fell in love with a Mexican restaurant with Amy. and went there twice in one week. this is a picture of the best Mexican chopped salad you will ever lay eyes on. 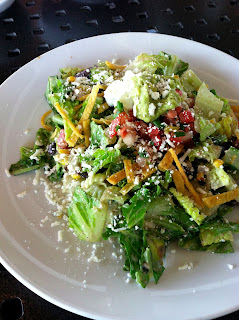 our cactus out front is blooming! it's just beautiful and amazing to see the desert flora bloom at springtime. 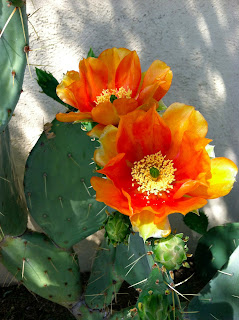 This is Drew-a good friend from my time at the Focus on the Family Institute. I haven't seen him since then (4.5 years ago) but he and his wife live about 4 hours from Tucson and were in town for a conference so we got together for dinner and had to play the classics, Settlers and speed scrabble! It was the best mini-reunion and really fun for Tyler to meet them. 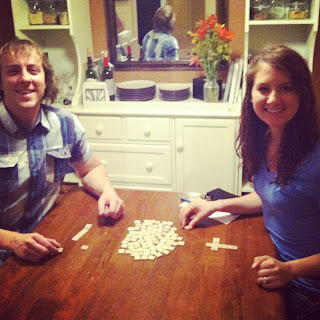 This is the trusty Corolla getting a new battery and four new tires. I went on base last week for a doctor appointment. I was in and out in less than 20 minutes but stayed in the exact same spot for 4 hours. I went back to the car at 11am to leave and found that it wouldn't start. I tried my darling husband but he didn't answer his phone. So I called USAA and they were on it to send a tow truck immediately. The tow company called me at 11:28 and said they were on their way but wouldn't be able to get on base unless there was someone at the gate to meet them and sponsor them. I said I had no way of getting to the gate, since my car wouldn't start. So I called insurance back and explained the situation. They tried a few more companies but all said they weren't allowed to get on base either. At this point in time, the internet on my phone stopped working, right after it had been so useful to connect me to USAA. I decided to call a cab so I can at least go home. Since I was no longer connected to the internet and the pharmacy I was sitting outside of didn't have a phone book, I texted Amy and asked if she could look up a number for a cab company, which she did immediately. Unfortunately the cab companies also need a sponsor to get on base, which makes no sense to me because if someone is calling for a cab that means they have no way of getting around, thus unable to meet the cab at the gate. So I couldn't get picked up by a cab, couldn't get a tow truck and the only two people able to rescue me (Tyler and Kristin) both were not answering their phones. Amy suggested I call the military police/security forces to see what they would suggest and they were very helpful in telling me the name of the tow company they use, which does not need to be sponsored to get on base. So I called USAA to ask if I could recommend they send Gary's Towing to come get me and of course, they are unable to take requests for specific companies. Now it's about 1:00 and while I'd been going inside to the pharmacy to get a quick dose of air conditioning or use the bathroom, I am hungry, thirsty and rather frustrated. I decide to call Gary's Towing anyways and just deal with the fact that we will have to pay for the tow out-of-pocket. However, the lady who answered at Gary's Towing said they'd be happy to come get me on base but it would be about a 3 hour wait. I declined and right after hanging up, Kristin texted me back and said she could come pick me up. While I was writing back, "yes please!" Tyler finally called me back and said he could leave work to come pick me up but since he drove his motorcycle to work that day would have to drive past the base to our house and go get the 4runner and come back to pick me up, which took about 50 minutes. there were very specific reasons I thought there was something more severely wrong with the car than a simple dead battery, which I would have easily asked someone for a jump, but I will not get into that. the saga ended after two hours at walmart waiting for new tires and a new battery. sigh. 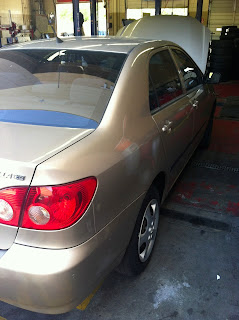 Finally, we decided to check out Tucson's minor league team The Padres last Saturday night and it was a blast! the night was perfect and the Padres even walked away with a victory, which is a rare occurrence, apparently. 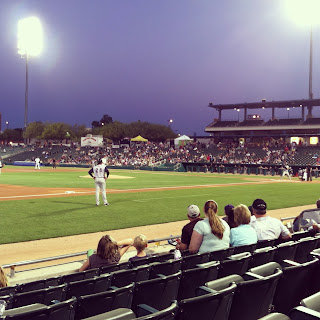 Thanks for checking in, especially after my long hiatus. And if you feel like visiting us in Tucson, we have a brand new queen-sized guest bed with your name on it!
Posted by danielle at 3:46 PM