okay, so i had a problem, rather, a couple problems...
pause.  let me add here that some would argue the past-tense usage is, naturally, incorrect.  others might question my understatement of "a couple problems".  i digress.

i had a beautiful set of my grandmother's china that had been in boxes since 'winning' it on the night of our rehearsal dinner (for those of you who don't know the story, when we were packing up my grandpa's house after he had passed away, there was a set of my grandmother's china that was going to our family.  since we didn't know which one of us four should have it, and the crime of splitting up a china set is unspeakable, i suggested the first one to get married should, obviously, inherit the china.  (this was before any of us were dating anyone) and so, as the first of us to get married, i was able to have grandma's china, fair and square).  back to it being in boxes.  we had neither the space nor the money to buy any sort of hutch for proper display in houston, so it sat (sigh) wrapped tightly in 2007 newspaper.  problem one: needing to let my grandma's china breathe and be on display, while at the same time pushing all possibilities of a hutch in our near future away.

problem two: i have been, for whatever reason, hooked on interior decorator blogs, crafty blogs or sewing/cooking blogs.  it's been bad.  knowing there is only so much i can do with our house, as renters (and moving out in less than two years), our home is going to have to look spectacular as-is...with a few minor "cosmetic" upgrades.  i found one blog in particular, the handmade home and one particular picture of a kitchen that got me all worked up.  problem two: wanting desperately to decorate my kitchen in a cute, fun and fresh way.

so...my problems clearly laid out, i got working on a good solution (if only marriage were this easy!!)

three beautiful bowls in tj maxx sent me spiraling downward, upward, sideward, every 'ward'.  until, here i sit...10 hours (and a few breaks) later...and a new kitchen.  for the most part.  i, fortunately, have some sort of picture documentation.  not necessarily the process (something about spray paint and indoors getting to my head...and spray paint and outdoors making me sweat uncontrollably)  but here ya go!
(as always, if you would like to see the picture larger, just click on it!)

so this is what my day started out with...a bunch 'o' junk!  i was very pleased with what i found.  i am, obviously, most excited about that birdcage and ALMOST spray painted that baby red to match.  but i didn't.  and now, i'm glad i didn't. 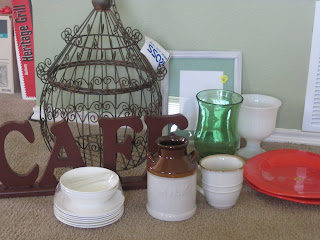 cute cafe sign.  that i should have lied flat to spray paint, but i didn't.  this was the first thing i did, and inside.  (i know, i know...but the can said to use at room temperature, 70 degrees.  um...it's never 70 degrees) later, i did move outside to the garage.  my linoleum is thankful. 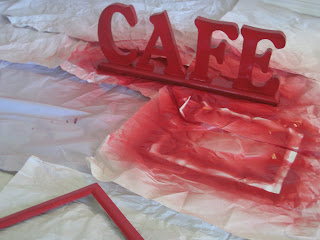 middle process.  have i mentioned how much i love spray paint?  no?  well...i DO!  it's wonderful!  even if it does get all over everything.  that can-looking thing in the middle actually a "milk" imprint on the side, so i painted over it with some paint we never used. 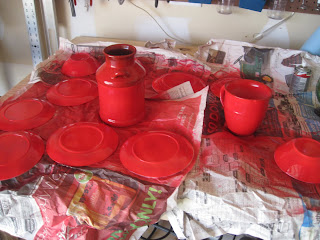 and a few many tries later, this is what i came up with for the corner and loved it.  you can see the milk can, front and center.  (rather, front and right...but you get it) i'd love to find a plant that hangs down the side of the cabinet, so we'll see...also...the sign says "if you don't like the food...have more wine" 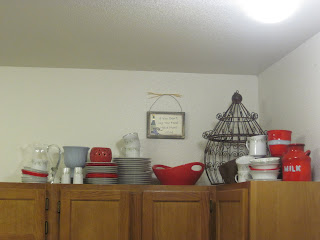 and the other side of the kitchen.  i also love this set up, but couldn't decide if it should be next to the corner set up, or in the other corner (it's a BIG wall!) or what.  so i experimented.  rather, i scooted it up to the right corner and that's where it stayed. 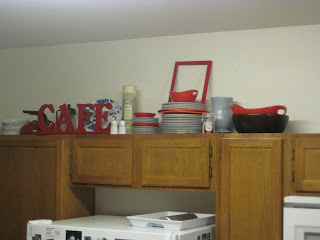 see?  lots of wall.  and there was another four feet on the left side before getting to the corner. 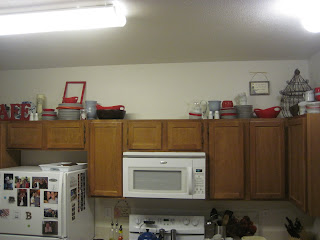 sooo...i tried putting some other random stuff on the left side to make it stretch out more, but obviously that's not looking so good.  (even though it's my wonderful painting from painting class with tracee) 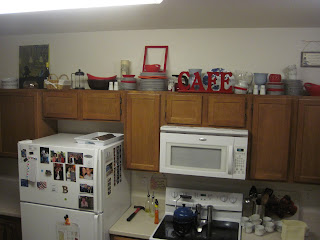 and THIS is what i ended up with.  and i really like it.  but i'd also be persuaded to push it to the other dark, boring corner to see what that would look like. 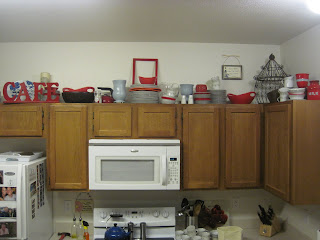 and the finished project!  and because i just found the picture...this is what inspired me... (click on 'this') 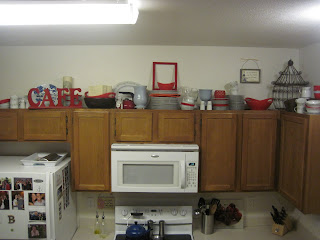 so...as you can see, i've solved both of my problems AND added a little fun to my kitchen.  i'd love feedback!  (and not on my poor photo skills or the fact that i took this at night...or the goo gone/hammer seen in some pictures)  hope you have a happy friday and a GREAT weekend!
Posted by danielle at 9:58 PM