keep the change, ya filthy animal

Shh...don't tell anyone I'm here...not here, obviously.  but here, at my house.
my blinds are closed to the chill outside, the doors are locked and I'm as quiet as a church mouse.
my husband has taken the dog, the boat, and a friend and has taken off for the lake to catch some sort of gill-breather and since I have to work tomorrow and he does not, I was rather okay to let him go without me.

I am quite enjoying the afternoon to myself. I have phone calls to make and emails to respond to and surely friends who would keep me company but I am so content just sitting here quietly alone that I am convinced I wouldn't answer the door if someone knocked.

My fantasy football team is beating my husband's so far and it's going to be awe-some if I win. (for obviously, bragging reasons)

Speaking of working tomorrow, since school has started this year, I have been so fortunate to have found a great elementary school to sub continuously at the first three weeks, and then as much as I've been able to since.  The principal called me on Friday and asked if I would be willing to take a position there as a long-term sub until we move in March. I agreed to it before I even knew what the position was and couldn't believe it when she said it was teaching 4th graders reading and writing, which is as close to an English teacher as I'll ever get to in an elementary school. Wahoooo! While I wasn't looking for anything full-time, I am glad to have something to keep me busy, as Tyler will be TDY away from home starting 1 Nov until we move in March.

The best part about the job is that we'll still be able to go on our vacation to BELIZE October 16-27th!!  We're pretty excited to explore both the rainforests and ruins as well as the cayes and the world's second largest reef. It'll be the second time for me traveling with just a backpack, but I am so thrilled about the adventure that I could care less. We're expecting it to rain at least a little bit each day, so I'm going to be expanding me "dry fit" wardrobe to accommodate that. Since it is the low season, we'll make a few phone calls to see if we need to reserve rooms, but don't plan on getting any reservations to allow for flexible changes.

Finally, I'll leave you with the only two pictures I got last night at Oktoberfest here in Wichita Falls. We had a fun time celebrating the Germans and will miss the International part of Sheppard when we move to Tucson (however, thankfully, we'll be at the Intl' guard unit that trains the Norwegians so I don't have to say goodbye to Kristin just yet!) (we missed you, Tim, but your mug made the rounds with Drew and got some good use--Oktoberfest 2013 will be much, much more awesome) 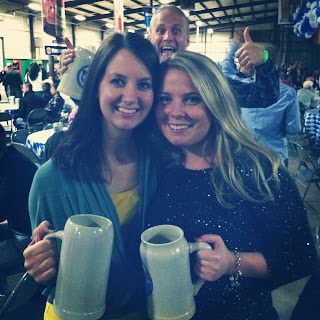 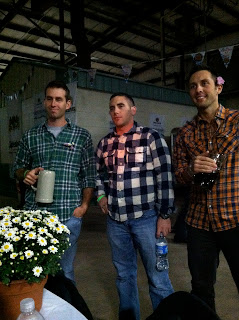 We're off to San Antonio on Tuesday as Tyler will complete the F-16 profile at the Centrifuge (9G's, baby!) I'm sort of excited to watch, but mostly, we're looking forward to staying on the Riverwalk and enjoying some fun, autumn San Antonio.

(and in case you didn't notice, the title of this quote is from one of the greatest movies of my childhood and is code for my current situation, "Home Alone") (aren't I so creative?)